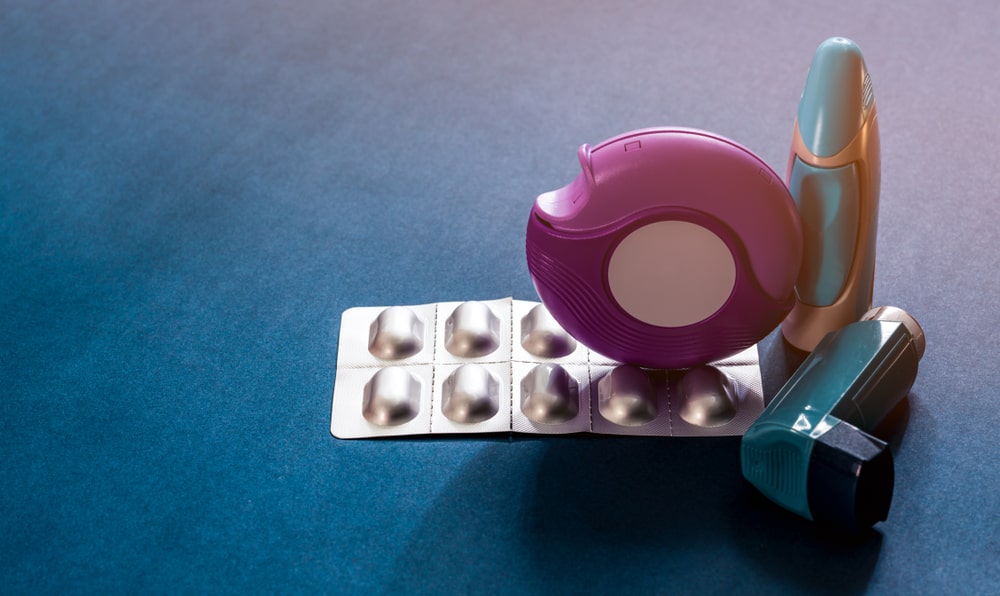 Pathophysiology and Pathogenesis of Asthma

Inflammation has a central role in the pathophysiology of asthma. Airway inflammation involves the interaction of many cell types and multiple mediators with the airways which eventually results in the characteristic pathophysiological features of the disease. This airflow limitation in asthma is recurrent and caused by a variety of changes in the airway.

(a) Bronchoconstriction: In asthma, airways are narrowed in response to exposure to a  variety of allergens or irritants which subsequently results in restricted airflow. Allergen-induced acute bronchoconstriction results from IgE-dependent mediators like histamine,  tryptase, leukotrienes, and prostaglandins that directly contract airway smooth muscle. In addition to this, other stimuli (including exercise, cold air, and irritants) may cause acute airflow obstruction.

(b) Airway edema: In severe conditions, other factors like edema, inflammation, mucus hypersecretion, and the formation of mucus plugs, as well as structural changes including hypertrophy and hyperplasia of the airway smooth muscle may exacerbate the diseased condition.

(c) Airway remodeling: In some asthmatic patients, permanent airway remodeling is seen which is either not reversible or partially reversible. This structural damage involves thickening of the sub-basement membrane, subepithelial fibrosis, airway smooth muscle hypertrophy, and hyperplasia, blood vessel proliferation and dilation, and mucous gland hyperplasia and hypersecretion.

Treatment of asthma is based on the severity of the disease and response to individual agents.

Sympathomimetics are primarily used to treat reversible airway obstruction caused by the bronchospasm which is associated with acute and chronic bronchial asthma, exercise-induced bronchospasm, bronchitis, emphysema, bronchiectasis (abnormal condition of the bronchial tree). Stimulation of β2-adrenoceptors results in the relaxation of bronchial smooth muscle. These agents also inhibit the release of mediators and stimulate mucociliary clearance. Adrenergic agonists are further classified into the following groups:

a. Selective β2 adrenoceptor agonists:  Albuterol, levalbuterol, pirbuterol, and metaproterenol are shorter-acting and have enhanced  β2-receptors activity. They are generally administered by inhalation.

b. Non-selective agonists:  Isoproterenol is a non-selective β-adrenoceptor agonist and a potent bronchodilator and is most effective in asthmatic patients when administered as an inhalant. During an acute attack, dosing every 1–2 hours is required; oral preparations are administered 4 times daily. Epinephrine acts as a β1 and β2 and α1-receptor agonist. Epinephrine can be administered as an inhalant or subcutaneously (in emergency circumstances); the onset of action occurs within 5–10 minutes, and the duration is 60–90 minutes.

Mechanism of action of β-agonists:  β-agonists stimulate adenylyl cyclase, and increase cAMP in smooth muscle cells of the respiratory tract which results in a powerful bronchodilator response.

Adverse effects of β-agonists:  Being non-selective, epinephrine and isoproterenol have significant β1-receptor activity and may cause certain cardiac effects including tachycardia, and arrhythmia. Skeletal muscle tremor is a common β2 effect, loss of response (tolerance and tachyphylaxis) with excessive use of short-acting sympathomimetics.

Muscarinic antagonist includes ipratropium, tiotropium, and atropine, which are the competitive antagonist of acetylcholine at muscarinic receptors. These drugs inhibit Achmediated bronchoconstriction and also decrease vagal-stimulated mucus secretion.  Ipratropium and tiotropium are administered by aerosol because of their poor absorption when given systemically. Atropine is readily absorbed into the systemic circulation. Adverse effects are drowsiness, sedation, dry mouth, and blurred vision, which limits its use in asthma management.

Methylxanthines are purine derivatives. Three major methylxanthines are found in plants and provide stimulant effects: caffeine (in coffee), theophylline (tea), and theobromine  (cocoa). Theophylline is the only member of this group that is important in the treatment of asthma. Because of the limited solubility of theophylline in water, it is complexed as a salt, as in aminophylline and oxtriphylline.

Methylxanthines cause bronchodilation by antagonizing the adenosine receptor (adenosine causes bronchoconstriction and promotes the release of histamine from mast cells). In addition, these drugs may decrease the entry and mobilization of cellular Ca2+  stores.  Theophylline also has some anti-inflammatory properties reducing airway response to the stimulus caused by histamine and other allergens. When given at a high dose, theophylline also inhibits the phosphodiesterase enzyme, increasing cAMP in the cytosol.

Actions of methylxanthines on other systems include positive inotropic and chronotropic action on the heart, pulmonary and peripheral vasodilation, increased alertness,  stimulate gastric acid and pepsinogen release, and diuresis.

Adverse effects of methylxanthines are arrhythmias, nervousness, vomiting, insomnia,  gastrointestinal bleeding, severe nausea and vomiting, hypotension, arrhythmia, and seizures from an overdose. It may cause behavioral problems in children. Theophylline has a very narrow therapeutic index; blood levels should be monitored on the initiation of therapy.

Corticosteroids (glucocorticosteroids, glucocorticoids, and steroids) are by most effective controllers of asthma which effectively suppress the characteristic inflammation in asthmatic airways. These include beclomethasone, triamcinolone acetate, budesonide, flunisolide, and fluticasone propionate. Corticosteroids reduce the synthesis of arachidonic acid by  phospholipase-A2 and inhibit the expression of COX-2, the inducible form of cyclooxygenase.

Glucocorticoids also produce bronchodilation, probably by attenuating prostaglandin and leukotriene synthesis by inhibiting phospholipase A2 and by inhibiting the immune response. They also increase responsiveness to sympathomimetics and decrease mucus production. Inhaled glucocorticoids are considered appropriate in most cases of moderate asthma that are not fully responsive to aerosol β-agonists. Frequent aerosol administration of glucocorticoids can occasionally result in a very small degree of adrenal suppression.  Because of their systemic adverse effects, oral glucocorticoids are usually reserved for patients with severe persistent asthma.

These drugs interfere with the synthesis or the action of the leukotrienes.

(i) Leukotriene Receptor Blockers:  Zafirlukast and montelukast are antagonists at the LTD4 leukotriene receptor. This blocks the action of the leukotrienes C4, D4, and E4 (LTC4, LTD4, LTE4, respectively). These drugs reduce bronchoconstriction and inflammatory cell infiltration. They are administered orally  1-2 times a day and are effective in preventing exercise, antigen, and aspirin-induced bronchospasm. Headache and elevation in liver enzymes are the major adverse effects seen with this drug.