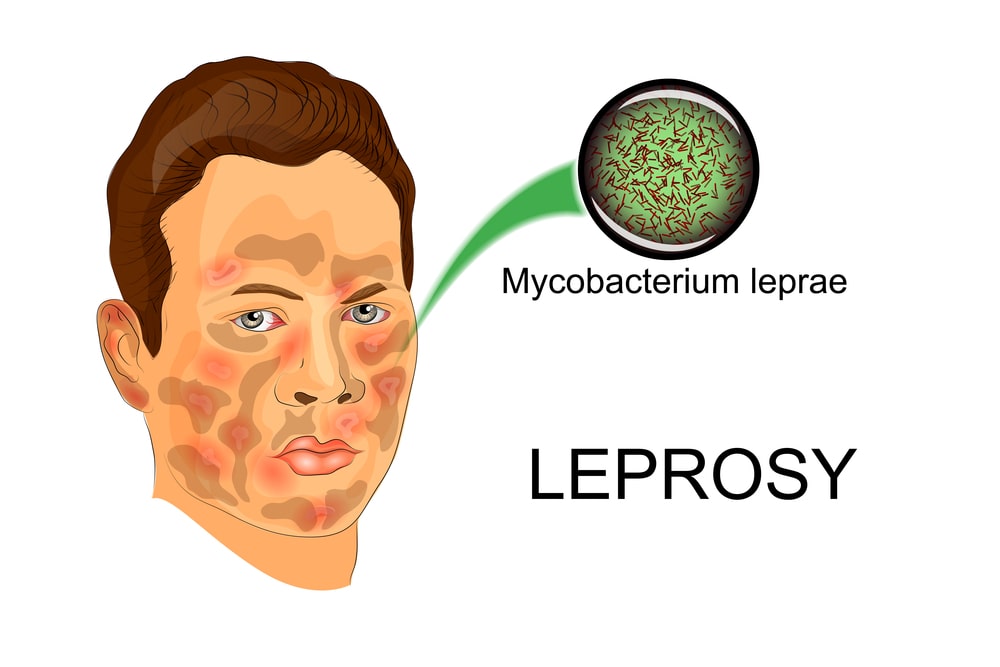 Leprosy or Hansen’s disease is a chronic human disease caused due to an acid-fast bacillus which produces nodules in the skin and loss of sensation in the affected region.  Infection results in tissue loss, so fingers and toes become shortened and deformed as the cartilage is absorbed into the body. This dermatological infection is caused by Mycobacterium leprae and the disease develops very slowly over years.

Once the bacilli are multiplied to a sufficient extent, antigen-antibody reactions are evoked by the cell-mediated immunity. These reactions may occur either suddenly in the absence of a drug or during the anti-leprotic treatment. These hypersensitivity reactions are occurring not as a result of allergy to the drugs but should be considered allergic reactions to the metabolic products of the infecting organism. These reactions are called ‘lepra reactions. In lepra reactions, skin lesions appear which later on show inflammation i.e. they become red, more prominent, swollen shiny, and warm. Nerves also show inflammation and develop pain. Pain in nerves develops due to increased intraneural pressure because of oedema and the cellular reaction of an inflammatory process. To control these reactions, usually, a glucocorticoid is added to the anti-leprotic drug regimen.

Based upon the area under infection and the intensity of lepra reactions, leprosy can be categorised into the following types:

(i) Tuberculoid Leprosy:  It is characterized by the presence of infection in a restricted area and a less pronounced lepra reaction. The latter indicates that very few microorganisms are present in the infected area of the skin. Hence, dapsone alone may be effective.

(ii) Lepromatous Leprosy:  It is characterized by a widely disseminated disease with a high number of infecting microorganisms. Hence, this form needs more drastic (i.e. multidrug) and prolonged treatment.

(iii) Indeterminate Leprosy:  In the very early stages of the disease, microorganisms are not multiplied to the extent to induce lepra reactions. This early form of the disease is known as indeterminate leprosy.

Relatively few drugs are available to treat this chronic dermatological disease. These drugs include dapsone, clofazimine, thiacetazone, ethionamide, prothionamide, and rifampin.  An ideal antileprotic agent should serve two important objectives. It should be able to control lepra reactions and it should eliminate viable bacilli from the blood and nasal secretions by stopping their multiplication. Because of the avascular nature of the lesions and the slow growth of bacilli, prolonged treatment of about 1 – 5 years is necessary to prevent relapse of the disease. Along with the main drug, adjunct therapy with corticosteroids (to suppress the lepra reaction), aminoglycosides or antimalarial agents are useful.

(a) Sulfones:  The demonstration that tuberculosis induced in guinea pigs could be controlled by sodium glucosulfone was a major advance in the chemotherapy of Mycobacterium infections. Chemically sulfones are the derivatives of 4, 4′- diamino phenyl sulfone or dapsone. They are bacteriostatic and are found to be effective in all forms of leprosy. They are cheap and easy to administer.

They are orally active and are well distributed in different body tissues and fluids. Many sulfones are in-vivo converted to dapsone. Acetylation and glucuronide conjugation are the main pathways for their metabolic inactivation. They are mainly excreted in the bile and reabsorbed from the intestine.

They all possess similar pharmacological properties. Due to structural similarity with sulphonamides, they share a similar mechanism of action, metabolic pattern and range of adverse effects with sulphonamides. The most active antileprotic drug amongst sulfones is dapsone.

It is used in combination with rifampicin and clofazimine as multidrug therapy (MDT) for the treatment of leprosy.

(b) Rifampin:  Rifamycin B is a member of a group of structurally related, complex macro-cyclic antibiotics isolated from Streptomyces mediteranei. Rifampin is a semisynthetic derivative of rifamycin B. It is already discussed in antituberculotic agents. This drug has bactericidal action on the growth of Mycobacterium leprae in a dose of 600 mg per day. It is used in combination with another antileprotic agent in the treatment of sulfone-resistant leprotic disease.

(c) Clofazimine:  It is an orally active phenazine dye with a bactericidal effect on M. Leprae. It was synthesized in 1954. It is widely distributed in different body tissues and fluids. It is accumulated specifically in the liver, spleen and lymph nodes. It has a plasma half-life of about 2 months. It is insignificantly metabolized and is excreted mainly in unchanged form into urine and faeces. A minor amount is excreted in sweat, tears, saliva and milk.

It acts mainly by interferring with the replication of bacterial DNA. Besides antibacterial activity, it also possesses anti-inflammatory activity that provides additional benefits to relieve the patient from leprae reactions. Because of its anti-inflammatory activity, the appearance of erythema nodosum leprosum is found to be delayed. It is often used in combination with other potent anti-leprotic agents to potentiate anti-leprotic activity. It may also be used to treat Buruli ulcers caused due to Mycobacterium ulcerans. Besides this, it is also used to treat pyoderma gangrenosum.

Other drugs like ethionamide and prothionamide may also be used as second-line agents in the treatment of leprosy.

Various derivatives of these acids have been prepared and may be topically employed in the therapy of leprosy, psoriasis, rheumatism and tuberculosis.