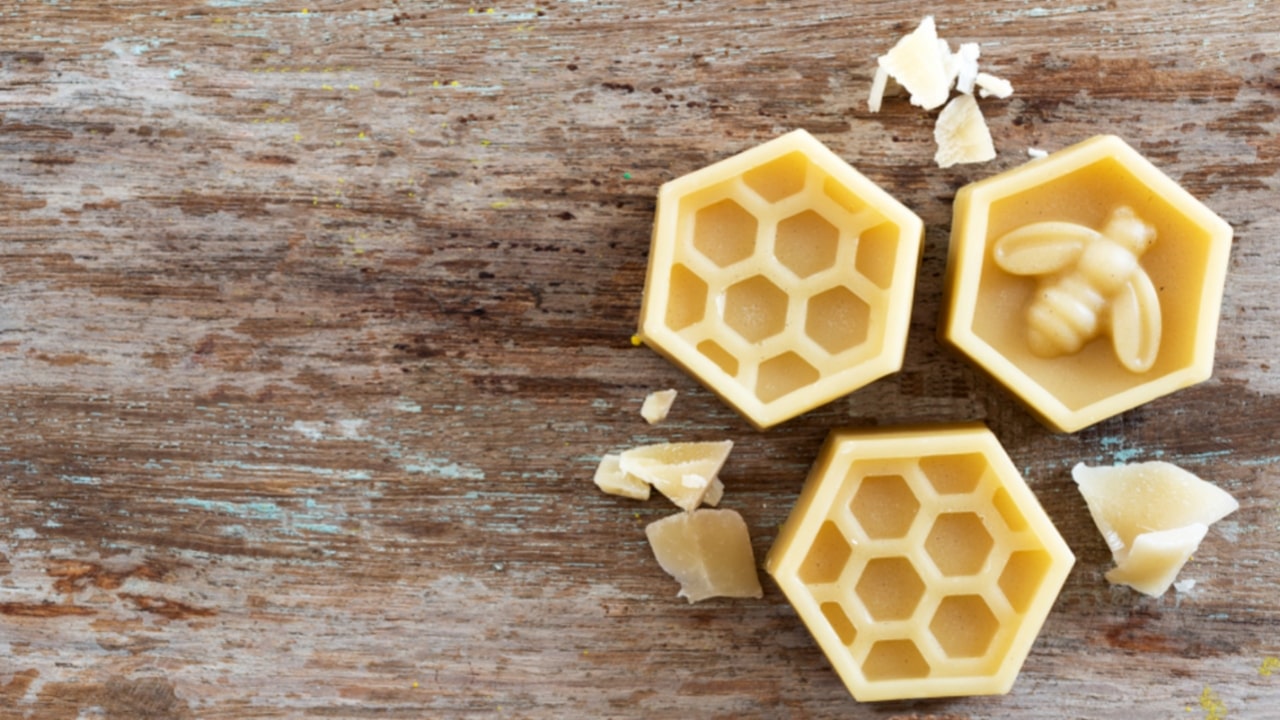 Biological Source: It is a purified wax obtained from the honeycomb of the bee species, Apis mellifera.

Two wax extraction methods are generally used – melting and chemical extraction. Melting is the most frequently used procedure. Wax can be melted by boiling water, steam, or by electrical or solar power. Chemical extraction by solvents is feasible only in a laboratory, where small-scale wax production is needed. Good wax solvents are gasoline and xylene. The disadvantage of this method is that all organic wax contaminants and constituents of the pupae, propolis, and pollen are dissolved. Thus the quality of wax is impaired.

The combs of honeycomb are broken and boiled in soft water and are kept for some time in the water by enclosing in a porous bag. After some time the wax oozes out from the bag and forms a cake which is collected after cooling. The foreign matters from debris are removed by scraping. The beeswax is purified by treating with dilute sulphuric acid or in hot water and thereafter bleaching of wax is carried out by treatment with hydrogen peroxide or chromic acid to get white beeswax.

Soft water is used because during the manufacturing of wax, there is often the formation of water emulsions. There are two emulsion types: in the first one, water particles are dispersed into wax, and in the second one, wax particles are dispersed into water. These emulsions are built with the help of emulsifiers. Proteins and dextrins are emulsifiers, contained in honey, pollen and salts of wax fatty acids with sodium and potassium. The second type of emulsion is caused by the salts of wax fatty acids with calcium, copper, and iron cations. Hard water contains cations that are diffused out of the vessels and used for wax production.

Beeswax consists primarily of a mixture of esters of fatty acids and fatty alcohols, paraffinic hydrocarbons, and free fatty acids. Two types of beeswax are marketed – yellow beeswax and white beeswax. Yellow beeswax is a light-brown solid, brittle when cold and presents a characteristic odour of honey. White beeswax is a white or yellowish-white solid having a characteristic, but faint, odour of honey. Yellow beeswax is smooth and soft to touch but breaks with granular fracture. It is insoluble in water, but soluble in hot alcohol and other organic solvents. In hot water, it melts in liquid form and can be made in any required shape and design after cooling. They are partially soluble in cold carbon disulfide and completely soluble in the same solution at temperatures of 30° and above. Beeswax has a specific gravity of about 0.95.

The composition of beeswax depends to some extent on the subspecies of the bees, the age of the wax, and the climatic circumstances of its production, and hence the physical properties are also varied.

Beeswax is used as a component in dietary food supplements (soft gelatin capsules and tablets), glazings and coatings, chewing gum, water-based flavoured drinks, and as a carrier for food additives (including flavours and colours) and cosmetics (Lipsticks, face creams). Beeswax is a suitable stabilizer for keeping oil-based capsule contents in suspension as well as in tablet formulations. Beeswax is blended with other oils and is used as a glazing agent for confectionery (including chocolate), in small products of fine bakery ware coated with chocolate, in snacks, nuts, coffee beans, dietary food supplements and in certain fresh fruits.

Adulterants: Beeswax is adulterated with paraffin, microcrystalline wax, Jan wax, carnauba wax, tallow and stearic acid. They are identified by saponification values and as well as solubility and melting point which is about 10-20°C lower than other waxes. Beeswax will not give turbidity when boiled with sodium hydroxide and cooled, but other waxes will form turbidity.