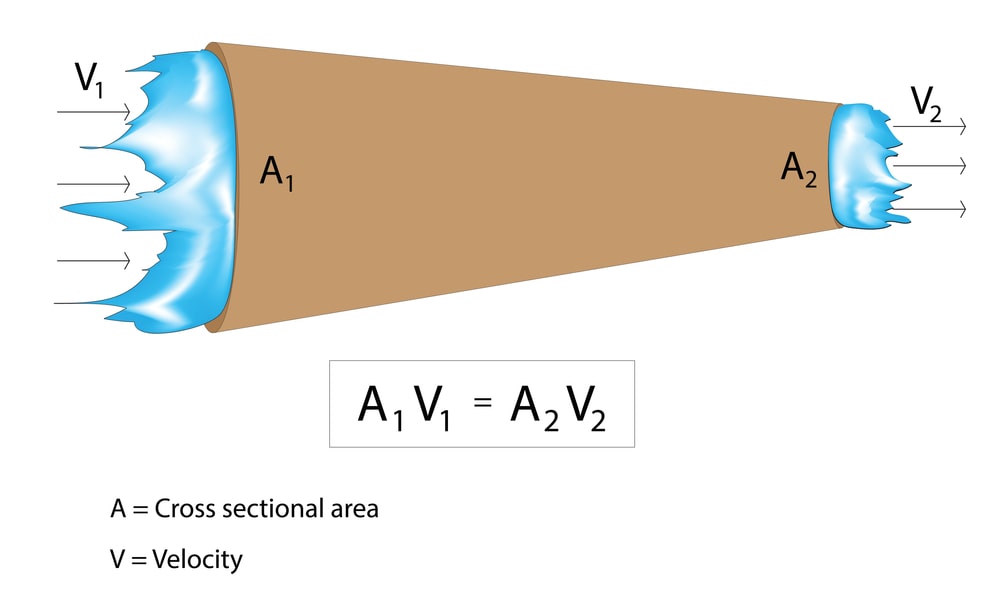 Bernoulli’s Theorem and Its Applications: Bernoulli’s theorem is the principle of energy conservation for ideal fluids in steady or streamlined flow. This theorem describes the relationship between the pressure, velocity, and elevation in a moving fluid such as liquid or gas. According to this theorem, the compressibility and viscosity (internal friction) are negligible and the flow is steady, or laminar. First derived (1738) by the Swiss mathematician Daniel Bernoulli, the theorem states that ‘the total mechanical energy of the flowing fluid comprising the energy associated with fluid pressure, the gravitational potential energy of elevation, and the kinetic energy of fluid remains constant. In simple terms, Bernoulli’s theorem can be described as ‘within a horizontal flow of fluid, points of higher fluid speed will have less pressure than points of slower fluid speed’.

Incompressible fluids have to speed up when they reach a narrow constricted section to maintain a constant volume flow rate. This is why a narrow nozzle on a hose causes water to speed up. If the water is speeding up at a constriction means it is gaining kinetic energy. To give kinetic energy is to do work. So if a portion of the fluid is speeding-up, something external to that portion of fluid must be doing work it. For example, consider that water flows along streamlines from left to right, Fig.1. As the outlined volume of water enters the constricted region it speeds up. The force from pressure P1 on water pushes to the right and does positive work. The force from pressure P2 on the fluid pushes to the left and does negative work since it pushes in the opposite direction as the motion of the fluid.

Bernoulli’s theorem investigates the distribution of pressure in a moving incompressible fluid.

For the instance consider that throughout the system the diameter of the pipe and the temperature is constant. Fig.2 represents a channel conveying a fluid from point 1 to point 2. The pump provides energy to cause the flow in an upward direction. Assume that one pound of fluid enters the channel at point 1. The pressure at this point is P1 lb/ft2. If the average velocity of the fluid is V1 lb/sec and the specific volume of fluid is V1 ft3 /lb. Point 1 is at height h1 above the horizontal bottom plane. The potential energy of a pound of fluid at point 1 is equal to h1 ft. lb. Since the fluid is in motion with velocity V1, a pound of fluid will have kinetic energy equal to V12 /2gc ft. lb. This expression is based on the average velocity (V) of fluid in the system. In reality, the average velocity differs from the mean velocity. The kinetic energy per pound of fluid flowing in the channel is given by

where w is the weight of fluid in the system, r1 is the radius of the channel and VL is the local velocity at distance r from the axis of the channel. As we know, the distribution of velocity varies widely within the channel at different localities, the true integral is obtained only when the actual velocity distribution is known. For each case, a different velocity distribution curve is obtained. Thus, the kinetic energy in the real sense is written as V2/ αgc, where α is a correction factor for variations in velocities at different locations in the channel. It was found that for viscous flow α = 1 and turbulent flow α = 2.

where V2 is velocity, P2 is pressure, and V2∗ specific volume of fluid at point 2.

If there is no gain or loss of energy in the system between points 1 and 2 it follows the principle of conservation energy. But it has been postulated that the energy is added by the pump. This energy is ‘W’ ft. lb/lb of fluid. Some of the energy is converted into heat by friction and dissipated into the environment through radiation as the system is at a constant temperature.

The loss of energy due to friction is ‘F’ ft. lb/lb of fluid. The total energies of the system under consideration that balances between points 1 and 2 will be

If the density of fluid ‘ρ’ is expressed as lb/ft3, then

Then the equation (4) becomes,

This expression is based on the consideration of one pound of fluid entering the system and all energy terms in the above equation (5) are per pound mass of fluid.