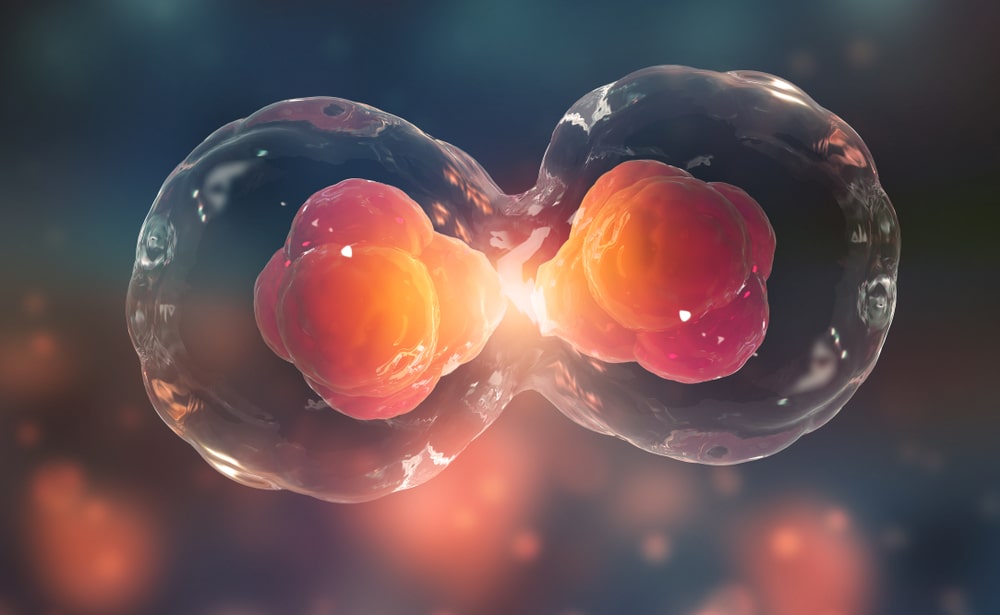 Cell Division: From the smaller plants like algae to the large trees like eucalyptus, all start their growth from a single cell called an egg cell. It is brought about by the development of new cells. Two important processes are continued which ultimately help in the vegetative growth and also in the preservation of hereditary characteristics. It includes the division of the nucleus termed mitosis and the division of cell cytoplasm, referred to as cytokinesis.

Mitosis is a somatic cell division that is responsible for the development of a vegetative body of plants. A German Botanist Strasburger (1875) first studied it in detail. The process of mitotic cell division consists of four important stages, viz. prophase, metaphase, anaphase and telophase (Figure.1).

This phase of chromosome fixation is the longest one in the mitotic cell division. Firstly, the indistinct chromosomes appear as the recognizable thread. Chromosomes are closely occurring double threads of which each longitudinal half becomes chromatid. Gradually chromosomes are thickened. Chromatid starts dividing longitudinally into two halves along with chromosomal substance matrix around it. Some gaps start appearing in the chromosomes which are called centromeres. At the end of the prophase, nucleoli become smaller, the matrix becomes clearer and the nucleus enters into metaphase.

In anaphase, chromatid halves move away equatorially at two opposite poles with the tractile fibres. The chromatid separate from each other. The spindle undergoes maximum elongation to facilitate the separation of diploid chromatids. It is the shortest phase of mitosis.

In telophase, chromatids form close groups. The polar caps of the spindle disappear and the formation of nuclear membrane takes place around the groups of chromosomes. The matrix and spindle body disappears completely. The appearance of nucleoli and nuclear sap makes them recognizable as two distinct nuclei.

Once again nucleus formed grows in size and starts working as metabolic nuclei to enter again in the cycle of mitotic cell division. It mainly depends upon the types of plants, plant part and temperature.

Cytokinesis is the partition of cytoplasmic material. It takes place either by the formation of new cell walls or by the cytoplasmic breakdown. New cells are formed by the deposition of cellulosic material in the equatorial zones, which forms the membrane and divide cytoplasm into newly formed cells.

Meiosis is a process of nuclear division in which the numbers of chromosomes are reduced to half (n) from the basic nucleus of 2n chromosomes. A German botanist Stransburger (1888) was the first researcher of this complex genetic process. Chromosomes are called the carriers of hereditary characters, so meiosis is the process of transmission of these genetic characteristics. All sexually reproducing plants and animals are gametes with a haploid number of chromosomes. Fusion of the male and female gametes results in a zygote whereby doubling of chromosomes to 2n takes place to develop offspring.

In this process of meiosis, the mother nucleus undergoes complicated changes which can be subdivided into various phases as given below.

Prophase I: In this phase chromosomes are systematically arranged. This phase is again divided into five different stages:

Anaphase I: The Chiasmata of the homologous chromatids repels each other to opposite poles. Chromosomes are carried away by the tractile fibres to the equators. This is an important stage at which the reduction of chromosome number from diploid to haploid occurs.

Telophase I: At both the equatorial poles, pairs of chromatids start developing as the two haploid daughter nuclei. The nucleolus starts reappearing and the formation of a nuclear membrane takes place. Two daughter nuclei thus formed enter the second process of Division II.

All the phases of division II are similar to that of mitotic cell division. Telophase I passes into prophase II.

Prophase II: Both the chromatid groups which have the loose ends go on coiling and become shorter and thicker. Nucleolus and nuclear membrane vanishes and spindle fibres show their appearance.

Metaphase II: In Metaphase II, chromatids once again starts separating equatorially at two opposite poles. Pairs of chromatids separate with their centromere and end in Anaphase II.

Anaphase II: At the stage of Anaphase II, two sister chromatids of each pair of chromosomes move to opposite poles of the spindle as directed by the centromeres.

Telophase II: In Telophase II, both the polar groups of chromosomes are converted to the nuclei by the formation of a nuclear membrane.

Lastly via cytokinesis four daughter cells are formed each having the haploid or ‘n’ number of chromosomes.