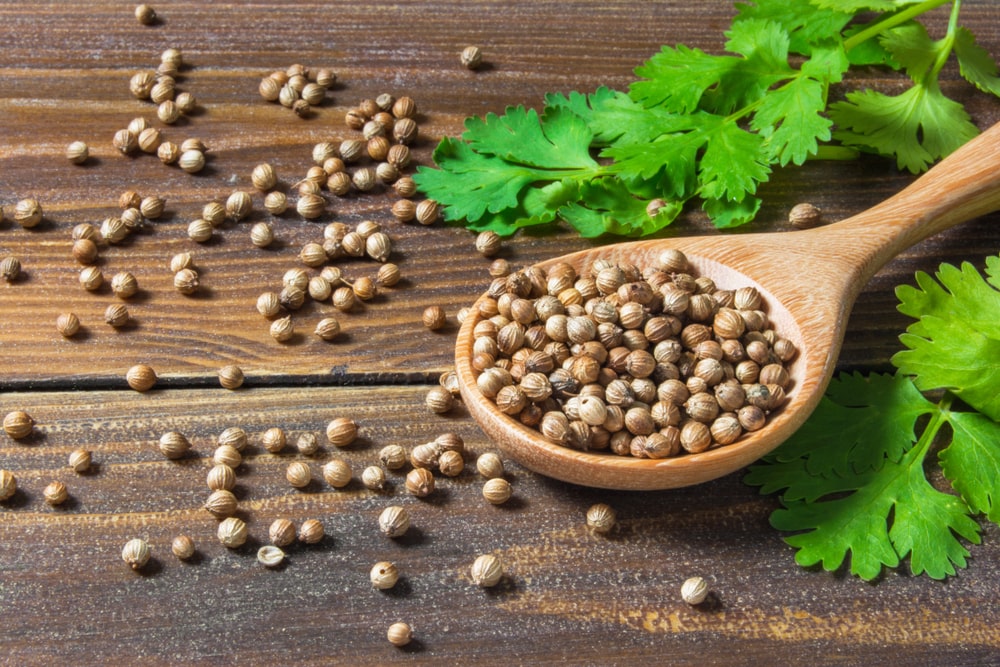 Coriander is an annual herb in the family of Umbelliferae. It is also known as Chinese parsley, dhania, or cilantro. All parts of the plant are edible, but the fresh leaves and the dried seeds are the parts most traditionally used in cooking.

Cultivation and Collection of Coriander

Coriander is cultivated as both Ravi and Kharif crops in India. It is grown as a mixed crop with wheat, grain, jowar, onion, sugarcane, cotton, brinjal, etc. For cultivation purposes, it needs about 15 to 20 kg of fruits per hectare area. It needs light to heavy black soil and calcareous soil for cultivation. Coriander fruits are sown by drilling method and within 100 days the crop is ready for harvesting. Few varieties like J-16, J-214, K-45, and New Pusa give better yield per hectare. The fruits are sown in March or soon. The plants achieve heights up to 45 to 60 cm and larger. The plants are grown in rows by keeping a distance of about 50 cm apart. Harvesting should be done in August. The umbels may be cut off with scissors when they are ripened. For larger fields ‘Scythe’ or ‘Mower’ may be used. The cutting may be done early in the morning to avoid the loss of fruits. The collected fruits are spreaded over sheets for drying in sun. After about 48 hours thrashing should be done. After thrashing the fruits are dried in warm air in shade. After drying the fruit loses its pungent foetid smell and acquires a warm agreeable odour and sweet taste. After drying the fruits are stored in well-closed containers because they are highly susceptible to deterioration from insects. About 70 to 75 percent world’s requirement of coriander is fulfilled from India. The Rajasthan state produces nearly 70 percent of crop demand from India.

Each mericarp has five wavy inconspicuous primary ridges and four straight prominent secondary ridges. The seed is coelospermous. The oil possesses specific gravity 0.870 to 0.885, optical rotation +8° to +14°, and refractive index 1.462 to 1.472.

The fruits contain up to 14 ml/kg essential oil with (+)- linalool, camphor (4-6 percent), geranyl acetate (1 to 3.5 percent), γ-terpinene (2 to 7 percent), and other monoterpenoid hydrocarbons.

The fruits and fruit oil is used as an aromatic, carminative, stimulant, flavoring agent, along with purgative uses in the prevention of the gripping effect. It is used as an anti-spasmodic.

Varieties of Coriander: Three varieties can be best distinguished by the determination of the number of fruits per gram.