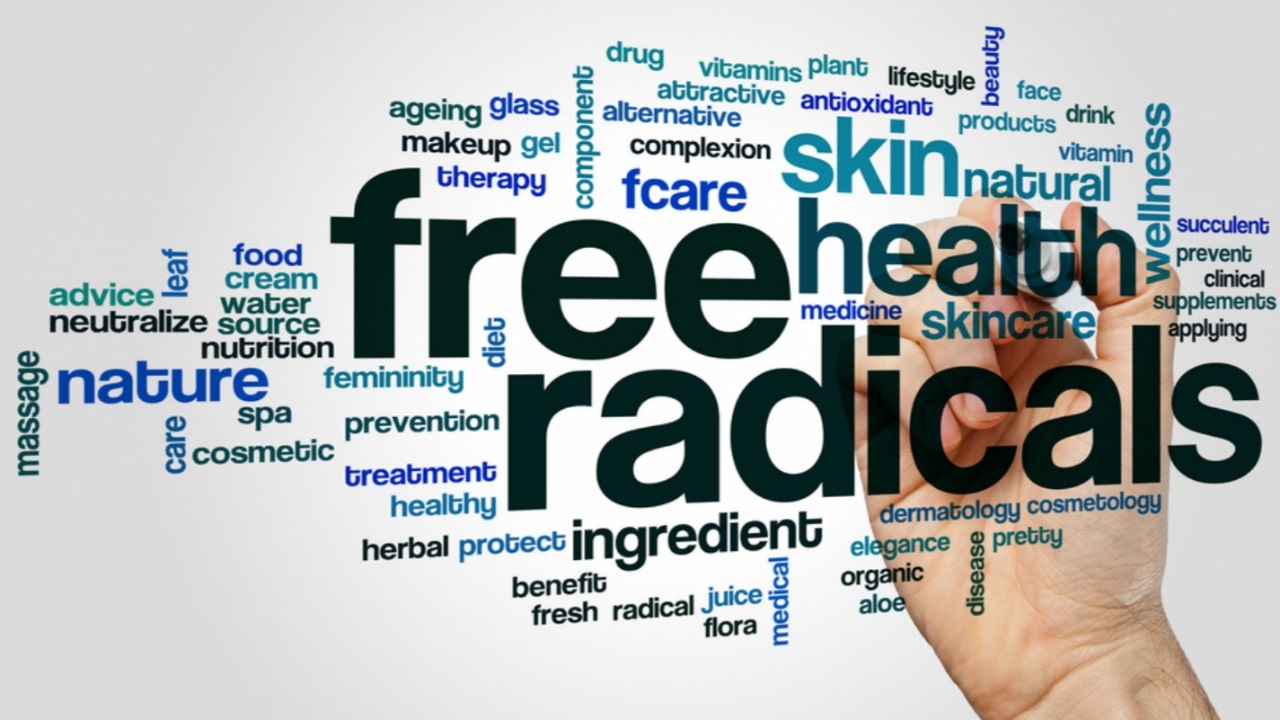 Damaging Reactions Of Free Radicals: Free radicals are molecular species that contain an unpaired electron (usually represented as R.). Consequently, they are some of the most chemically reactive molecules known. Because of the need to pair its single electron, a free radical must abstract a second electron from a neighboring molecule. This causes the formation of yet another free radical and a self-propagating chain reaction ensues.

Free radicals in the human body can arise from fatty food, smoking, alcohol, environmental pollutants, hydrogen peroxide, pollutants, ozone, toxins, carcinogen toxins, ionization, etc. The vast majority of free radicals come from within the body, an unavoidable by-product of a living system. Free radical intermediates are produced in living systems under normal conditions; the body handles free radicals formed by the breakdown of compounds through the process of metabolism. The major sources of free radicals (such as O2 and HO2) are modest leakages from the electron transport chains of mitochondria, chloroplasts, and endoplasmic reticulum.

The resulting free radicals, such as superoxide anion (O₂) and hydroxyl radical (OH), as well as the non-radical hydrogen peroxide, can damage macromolecules, including DNA, proteins, and lipids. Likewise, other products of oxygen metabolism, such as hypochlorous acid, chloramines, and oxidized lipids have all been related to such damages.

The superoxide radical, although it is unreactive in comparison with many other radicals. biological systems can convert it into other more reactive species, such as peroxyl (ROO), alkoxyl (RO), and hydroxyl (HO) radicals

There are four types of free radicals damages:

1. Damage to fat compounds: The fatty membranes surrounding the cells being the prime target to free radicals attacks. The damaged membranes then lose their ability to transport oxygen, nutrients, or water to the cells.

2. Damage to protein molecules: Free radicals also attack the nucleic acid which comprises the genetic code within each cell. The nucleic acids function is to regulate normal cell function, growth and also to repair the damaged tissues.

3. Cell damage: Damages did to the chromosomes and nucleic acids might initiate the growth of abnormal cells, which is the first step in cancer development.

4. Lysosomes damages: Lysosomes are little sacs in the cell that contain degenerative enzymes. The enzymes leak out when the membrane cell breaks and they start digesting the cell itself, spreading to nearby cell causing a chain reaction of destruction which. eventually, will lower the immune system resistance.

The production of reactive oxygen species and other free radicals and theirs damages to various molecules and cells may result not only in the toxicity of xenobiotics but also in the pathophysiology of aging, and various age-related diseases, including cataracts, arteriosclerosis, neoplastic diseases, diabetes, chronic inflammatory diseases, cancer, etc.,

radicals. Some agents counteract and minimize free radical damage and their function is to donate or provide unpaired electrons to which free radicals can attach without causing harm. Such “cell-savers” are called “Antioxidants.”

Antioxidants get their name because they combat oxidation. Oxidation is a reaction in which ar molecule loses an electron. The two major sources of antioxidants are:

a) Those that you get from food or food supplements

b) Those produced within your own body.

And there are some types of antioxidants, like the Flavonoids, found in the skin and seeds of fruits, that possess the ability to physically capture free radicals until these are removed from the body. Others, like Sulphorophane, found in broccoli, tend to enhance the body’s own free radical scavenging mechanism.

And finally, the ones like L. Limonene, a phytochemical found in citrus fruit peels, can perform both actions. Some popular antioxidants today include Vitamin E, Vitamin C, and Vitamin A, which can be taken under a health supplement form or through fruits, vegetables, fish oil, green tea, sesame oil, and Genistein from soybean shown to be cancer preventive.

Some antioxidants come from minerals, such as selenium, copper, zinc (they are considered antioxidants because they work together in conjunction with an antioxidant enzyme and are necessary for the enzyme to function properly), etc. The list of dietary antioxidants goes on and on and scientists are continually discovering more.

Lipids are highly reduced molecules whose structures all prominently feature aliphatic hydrocarbon moieties in some form or other. Oxygen radicals catalyze the oxidative modification of lipids. The presence of a double bond adjacent to a methylene group makes the methylene C-H bonds of polyunsaturated fatty acids (PUFA) weaker and therefore the hydrogen bonds more prone to abstraction.

The products formed by subsequent reactions are alcohols, hydroperoxides, ketones, epoxidesetc. Each of the compounds can undergo further reactions, leading to an increasingly complex mixture of products Cross-linking also occurs; either between lipid molecules or between lipid and proteins and chain scissions of polypeptides also may result. Lipid peroxidation leads to membrane damage by altering the geometry of the alkyl chains and thereby disrupting the lipid bilayer.

Oxidative stress and oxidative modification of biomolecules are involved in several physiological and pathophysiological processes such as aging, atherosclerosis, inflammation and carcinogenesis, and drug toxicity. Lipid peroxidation is a free radical process involving a source of secondary free radical, which further can act as a second messenger or can directly react with other biomolecules, enhancing biochemical lesions.

Lipid peroxidation occurs on polyunsaturated fatty acid located on the cell membranes and it further proceeds with a radical chain reaction. Hydroxyl radical is thought to initiate ROS and remove hydrogen atoms, thus producing lipid radical and further converted into diene conjugate Further. by addition of oxygen it forms peroxyl radical; this highly reactive radical attacks another fatty acid-forming lipid hydroperoxide (LOOH) and a new radical. Thus lipid peroxidation is propagated. Due to lipid peroxidation, several compounds are formed, for example, alkanes. malonaldehyde, and isoprostanes. These compounds are used as markers in lipid peroxidation assay and have been verified in many diseases such as neurogenerative diseases, ischemic reperfusion injury, and diabetes.

The amino acids that makeup proteins are in general, more oxidized than lipids. They contain a highly oxidized carboxyl group and a partially oxidized amino group. Several amino acids that occur in proteins are especially susceptible to oxidative damage Whether the oxidant is ozone, hydroxyl radical, or singlet oxygen, the most reactive species appear to be cysteine, histidine, tryptophan, methionine, and phenylalanine.

Protein damage may occur independently or in conjugation with lipid damage. The peroxidizing lipid may damage proteins that are associated with them in membranes. It is also possible that protein damage could occur even in an environment where lipid peroxidation was fully protected. Free radicals produced during the mitochondrial electron transport chain stimulate protein degradation. Oxidative protein damage may be brought about by metabolic processes that degrade a damaged protein to promote the synthesis of a new protein. In the process of cataractogenesis, oxidative modifications play a significant role in cross-linking of protein, leading to high molecular weight aggregates, loss of solubility, and opacity. The consequence of these events may include loss of enzyme activity, cytolysis, and even cell death.

Carbohydrate autooxidation is usually initiated by electron oxidants such as transition metal ions (Cu++or Fe+++) or oxidizing free radicals (HO or RO). Intracellular reactions of carbohydrates are usually linked to metal ion-promoted oxidation involving iron and copper. Stabilized free radical intermediates or oxidized products of sugars, including various dicarbonyl intermediates, react with and damage proteins by cross-linking and condensation reactions. Autooxidation of vitamins A few vitamins like C and E are well-known antioxidants. Others like folic acid are degraded in the gastrointestinal tract under the acidic condition of the stomach. Vitamin D is susceptible to photodecomposition, especially in the presence of photosensitizers, leading to an endoperoxide. Ascorbate can provide significant protection against decomposition.

DNA damage by free radicals has been the most extensively studied reaction. It has been found that both nuclear and mitochondrial DNA is attacked by free radicals. Among the free. radicals generated in the cell, particularly hydroxyl radicals formed by radiolysis of water are most potential.

The main targets of oxidative damage of the DNA chain include the purine and pyrimidine bases as well as the deoxyribose sugar moieties. The nature of damage includes mainly base modifications, deoxyribose oxidation, strand breakage, and DNA-protein cross-linking. The consequences of DNA damage include various mutagenic alterations of the molecule and interference of cell signaling resulting in alterations in gene expressions.