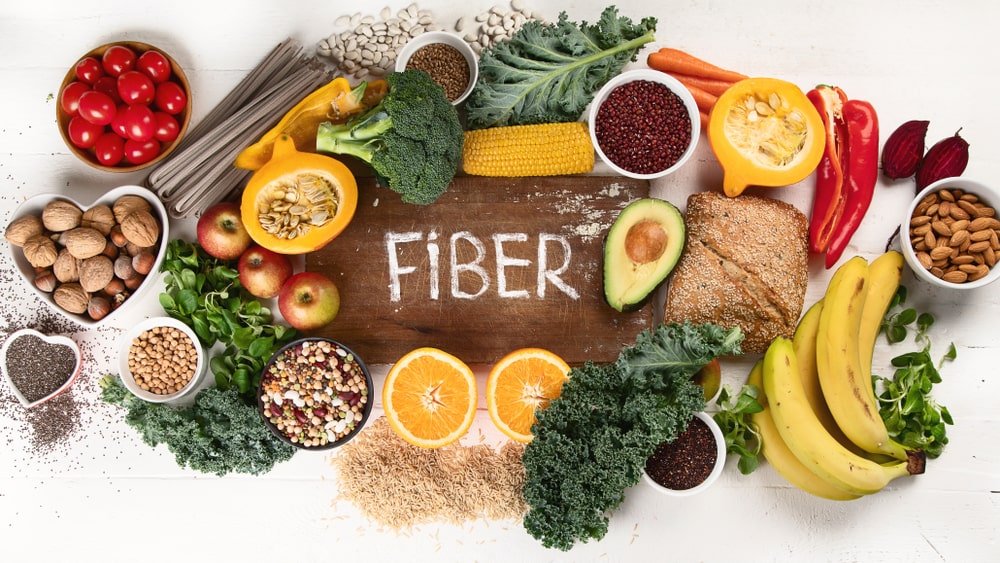 Short Note on Dietary Fiber: The term ‘dietary fiber’ (DF) was first introduced in the 1950s, referring to plant cell wall material later it was used to describe a class of plant-originated polysaccharides, which cannot be digested and absorbed in the gastrointestinal tract.

Dietary fiber is a type of carbohydrate that cannot be digested by our body’s enzymes. It is found in edible plant foods such as cereals, fruits, vegetables, dried peas, nuts, lentils, and grains. Fiber is grouped by its physical properties and is called soluble, insoluble, or resistant starch.

Dietary fiber helps keep the gut healthy and is important in helping to reduce the risk of diseases such as diabetes, coronary heart disease, and bowel cancer. Fiber reaches the large bowel undigested where it is fermented by bacteria. The by-products of this fermentation are carbon dioxide, methane, hydrogen, and short-chain fatty acids (SCFAs). The SCFAs are used by the body Initially, increasing fiber intake can cause an increase in gas production, which can result in bloating. However, depending on the type of fiber chosen, our bodies do adapt and go production for most people should decrease over time. Soluble fiber and resistant starch also function as prebiotics and support the probiotics (bacteria) we have in our large bowel which are essential for digestive health.

Soluble Fiber is a chemical constituent of plant cell walls, which are Non-cellulosic polysaccharides, oligosaccharides, pectins, p-glucans, and gums, Soluble fiber is found in foods like fruit, oats, beans, and barley. When it dissolves in water it forms a gel-like substance.

The physiological effects and mechanism follow through delay gastric emptying regulate blood glucose levels, lower serum cholesterol levels, and due mainly to its effects of increasing viscosity of gut content and colonic fermentation.

Resistant starch develops during the heating and then cooling of some foods such as potato and rice. Some grains and grain products have been developed for their high resistant starch levels and these include Hi-maize and BARLEYmaxTM. Foods high in resistant starch often have a low glycaemic index.

Insoluble Fiber is a chemical constituent of plant cell walls, which are Cellulose, hemicellulose, lignin. Insoluble fiber does not dissolve in water and is found in foods like wholemeal bread, wheat bran, vegetables, and nuts.

Major physiological effects and mechanisms follow through shorten bowel transit time, improve laxation due to its bulking capacity, support the growth of intestinal microflora (esp. probiotic species) due to its fermentation in the large intestine.

Plant foods contain both types of fiber in varying amounts, according to the plant’s characteristics of viscosity and fermentability.

The advantages of consuming Fiber depend upon which type of fiber is consumed and which benefits may result in the gastrointestinal system.