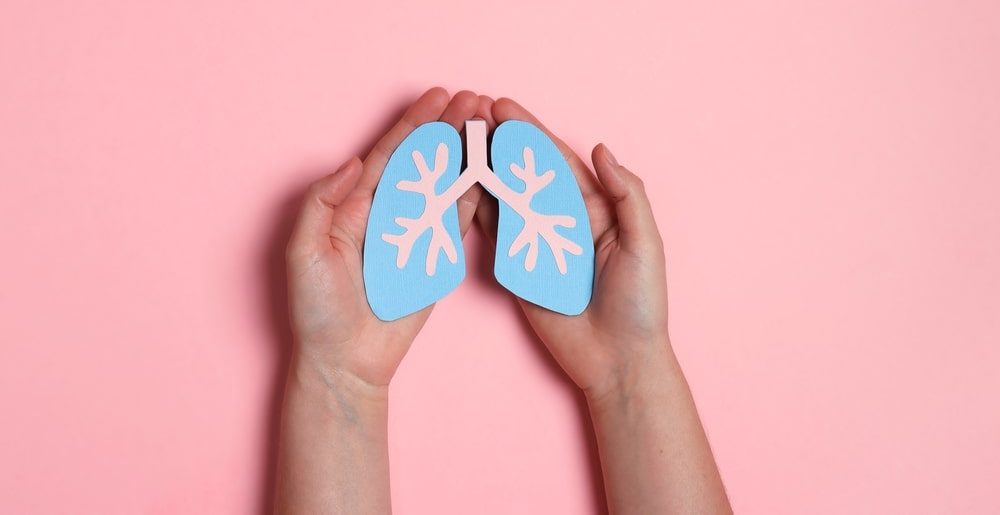 Tuberculosis is a disease of respiratory transmission. A person gets infected when he comes in contact with an environment contaminated with viable tubercle bacilli. These bacilli are expelled by coughing, sneezing, shouting, and singing of a patient with active tuberculosis. When these bacilli are inhaled by a person, they are inoculated into his respiratory bronchioles and alveoli usually towards the apex of the lung. When these microorganisms are multiplied to a sufficient extent, an antigen-antibody interaction is evoked by the cell-mediated T-lymphocytes. Tubercles (Ghon foci) are then formed due to the accumulation of macrophages at the site of infection.  This may lead to either permanent suppression of the infection or some microbes may survive in the foci and may become the source of postprimary infection when these foci break down under the conditions of weak host defense mechanisms. This may occur immediately or months or years later. The hilar lymph nodes may get easily infected due to the spreading of some macrophages containing active bacilli. The released microorganisms from the foci are circulated through lymph and blood to different parts of the body and infect (i) the reticuloendothelial system (e.g. liver, spleen, and lymph nodes), (ii) serosal surfaces and (iii) sites with high oxygen pressure (e.g. apices of lungs, renal cortex, and epiphyses of growing bones). Due to the multiplication of microorganisms at these sites, numerous small foci develop throughout the body. This type of wide-spread infection is known as ‘miliary tuberculosis’.

In some patients, the formation of Ghon foci leads to temporary suppression of the infection. Microorganisms may still be present in the foci. During coughing, the caseous material containing live microorganisms is expelled leaving cavities in the lungs. These active bacilli may then either be:

(i) Swallowed by the same patient resulting in infection of his alimentary tract, or

(ii) Inhaled by a healthy adult resulting in an infection of his trachea, larynx, or bronchi.

Such cases are more possible in conditions of overcrowding and poor personal and public hygiene. Infections of the oropharynx, larynx, and tracheobronchial tree respond fairly well to anti-tuberculosis therapy while infections in the gastrointestinal tract, urinary tract, or lymph nodes respond partially to the drug treatment.

A wide variety of drugs are clinically available for the treatment of tuberculosis. Efforts began in 1938 when sulfanilamide and dapsone did not satisfy the clinical requirements of antituberculosis therapy. The breakthrough was given by Waksman and his coworkers through the introduction of streptomycin in 1944. This was followed by the introduction of p-aminosalicylic acid, isoniazid, ethambutol, and rifampin.

Chemotherapy of tuberculosis faced some special problems because of the slow growth rate of mycobacteria and their intracellular location. Since the disease is chronic by its nature, the therapy needs to be continued for at least about 1 – 2 years in most cases. In such a chronic treatment, if only a single drug is used, the risk of the development of drug-resistant strains of Mycobacteria is always high. This is coupled with the risk of drug toxicity due to high doses of a single drug needed. The obvious solution to this problem is to use combination therapy. When two or more effective drugs are used in combination, resistance will not develop. However, drugs with similar toxicological profiles should not be used together.

The drugs used in the combination therapy are usually selected from ethambutol, isoniazid, and rifampin. The choice is dependent upon the type of disease and some patient-related factors.

For the sake of clinical convenience, these drugs are categorized into:

These are the drugs having high activity and reduced or minimal toxicities. Examples include streptomycin, isoniazid, ethambutol, and rifampin.

These are the drugs having less efficiency and significant toxicity. Examples include pyrazinamide, ethionamide, aminosalicylic acid, kanamycin, capreomycin, viomycin, amikacin, and cycloserine. These drugs are relatively toxic. Hence, they should be used only when the organism develops resistance to the first-line agents.

The above scheme of classification of antituberculosis agents is made by taking into account efficacy, organism susceptibility, and spectrum of adverse reactions of the drug.

(a) Streptomycin:  Amikacin, kanamycin, and streptomycin are aminoglycoside antibiotics with in-vitro bactericidal and in-vivo bacteriostatic activity against Mycobacterium tuberculosis. All these agents exhibit more or less similar pharmacological and toxicological properties.  Streptomycin reported in 1944, was the first clinically effective anti-tuberculosis agent. Its introduction radically changed the handling and prognosis of patients with these diseases. It is administered by the I.M. route and occasionally by the intrathecal route. Initially, it was given in large doses. The development of drug-resistant strains and incidences of severe adverse effects then aroused awareness about its dose calculations. Presently, it is given in the combination with other drugs. It is a more preferred agent in the treatment of tuberculous meningitis than that of pulmonary tuberculosis. It helps to suppress the disease but does not help to eradicate it. This preventive action may result due to its inventory action on bacterial protein synthesis.

It may cause nephrotoxicity, ototoxicity, and blood dyscrasias in patients. Its potential to cause these adverse effects is related to the dose and duration of the treatment. Streptomycin-resistant strains are usually treated with kanamycin. If resistance develops to kanamycin then viomycin may be tried.

(b) Isoniazid:  Introduced in 1952, isoniazid is an extremely effective and safe antimycobacterial agent.  Chemically it is a hydrazide of isonicotinic acid. It exhibits bacteriostatic action on the resting bacilli. Though its single-agent therapy is approved, the rifampin-isoniazid combination is the most favored anti-tuberculosis therapy.

It is an orally active agent and its oral absorption is reduced by the presence of food and antacids. It does not bind to plasma proteins. It has a plasma half-life of 1-1.5 hours. It is well distributed to different body tissues and fluids including cerebrospinal fluid. Because of its wide-spread distribution in the body, it is equally effective against all types of tuberculosis. It undergoes significant first-pass hepatic metabolism. The principal metabolites include acetyl isoniazid, isonicotinic acid, glycine conjugate, isonicotinic hydrazones, and  N-methyl-isoniazid. They are excreted in the urine along with a 10 – 25% dose in unchanged form.

Mechanism of action: Isoniazid inhibits mycolase synthetase, an enzyme necessary for the biosynthesis of mycolic acids. The latter is an important constituent of the mycobacterial cell wall. Since mycolic acids are present only in mycobacteria, isoniazid exhibits a high degree of anti-mycobacterial action.  Because of its ability to complex essential metals such as copper or iron present in mycobacterial enzymes, it interferes with various enzyme systems requiring pyridoxal phosphate as a cofactor. This results in changes in the metabolism of lipids, proteins, and carbohydrates. Nucleic acid synthesis is also affected.

The most significant adverse reaction is hepatotoxicity which may arise due to acetyl hydrazine, a toxic metabolite of acetyl isoniazid. It is characterized by fatigue, malaise, weakness, anorexia, fever, arthralgias, and increased serum glutamic-oxaloacetic acid transaminase (SGOT) level.

The neurotoxicity specifically is seen in malnourished patients, chronic alcoholics, or slow acetylators. It usually occurs in the form of peripheral neuritis which is characterized by numbness and tingling in the lower extremities and paresthesias in the hands and fingers. A supplementary dose of pyridoxal phosphate (vitamin B6) of 10 mg daily (for 50-100 mg isoniazid dose) corrects the neurotoxic effects of isoniazid.

(c) Ethambutol:  It is an orally effective bacteriostatic agent active against most strains of M. tuberculosis, M. kansas, and M. marinum. However, M. avium and M. intracellulare are usually resistant to its action.

Chemically, it is ethylene diamino-di-1-butanol. Activity is stereospecific. Dextro isomer is having the maximum antimycobacterial activity. Upon oral administration, it is well distributed in most of the body tissues and fluids except cerebrospinal fluid. Because of their drug-retention ability, erythrocytes may serve the function of slow drug-releasing depots.  About 20 – 30% administered dose is bound to the plasma proteins. It has a plasma half-life of about 3 – 4 hours. Major metabolites include an aldehyde and a dicarboxylic acid derivative which are excreted in the urine along with about 70% dose in unchanged form.  SAR studies indicated that the nature of branching, the distance between two nitrogen, and the extent of N-alkylation are the activity governing factors. Little is known about its mechanism of action. It probably interferes with the synthesis of proteins and nucleic acids by acting as an antimetabolite. Its complex forming ability is also a contributing factor to its bacteriostatic activity.

It is the most favored drug used in combination therapy with rifampin or isoniazid against streptomycin-resistant strains of tubercle bacilli.

(d) Rifampin:  It is an orally active bactericidal semi-synthetic derivative of rifamycin B, a macrocyclic antibiotic produced by Streptomyces mediterranei. Its oral absorption is impaired in the presence of food and p-aminosalicylic acid. It is well distributed to almost every body tissue and fluid including cerebrospinal fluid. About 90% administered dose is bound to the plasma proteins. It has a plasma half-life of 3.5 – 4.0 hours. The principal metabolites include 25 desacetylrifamycin (active) and 3-formylrifamycin (inactive). They are excreted in the urine along with a 7-10% dose in unchanged form. About 60-65% dose appears in the feces through the bile circulation.

Mechanism of action: DNA – dependent – RNA polymerase is an enzyme necessary for RNA synthesis. Rifampin acts on the β-subunit of this enzyme resulting in the formation of a stable complex. This, in turn, causes inhibition of bacterial RNA synthesis. However, mammalian enzymes are not affected by this drug.

Rifampin is a first-line agent. Since bacterial resistance develops rapidly if rifampin is taken alone, its combination with either isoniazid or ethambutol is preferably used.  However, combined use of isoniazid and rifampin may increase the risk of hepatotoxicity.