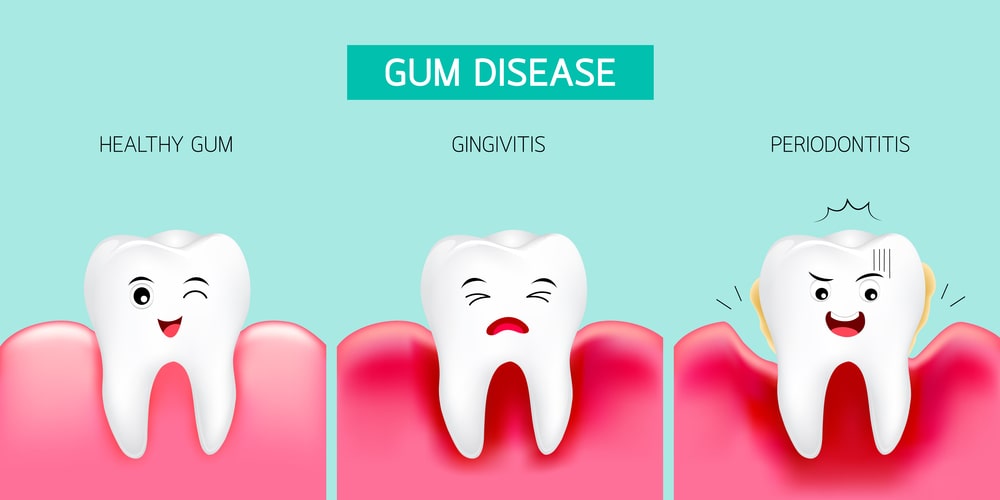 Gum disease is an inflammation of the gum line that can progress to affect the bone that surrounds and supports the teeth. The three stages of gum disease from least to most severe are gingivitis, periodontitis, and advanced periodontitis.

Signs and Symptoms of Gum Disease

Gum disease can be painless, so it is important to be aware of any of the following  symptoms:

Gum disease is an inflammation of the gums that can progress to affect the bone that surrounds and supports your teeth. It is caused by the bacteria in plaque, a sticky, colorless film that constantly forms on your teeth. If not removed through daily brushing and flossing,  plaque can build up and the bacteria infect not only your gums and teeth but eventually the gum tissue and bone that support the teeth. This can cause them to become loose, fall out or have to be removed by a dentist.

There are three stages of gum disease (Fig.1):

Gingivitis: This is the earliest stage of gum disease, an inflammation of the gums caused by plaque buildup at the gumline. If daily brushing and flossing do not remove the plaque, toxins are produced that can irritate the gum tissue, causing gingivitis. One may notice some bleeding during brushing and flossing. At this early stage in gum disease, damage can be reversed, since the bone and connective tissue that hold the teeth in place are not yet affected.

Periodontitis: At this stage, the supporting bone and fibers that hold the teeth in place are irreversibly damaged. The gums may begin to form a pocket below the gum line, which traps food and plaque. Proper dental treatment and improved home care can usually help to prevent further damage.

Advanced Periodontitis: In this final stage of gum disease, the fibers and bone supporting the teeth are destroyed, which can cause the teeth to shift or loosen. This can affect your bite and, if aggressive treatment cannot save them, teeth may need to be removed.

While most people with gum disease have the less severe form, called gingivitis, between  5% and 15% have a much more serious type of gum disease known as periodontitis. When proper dental hygiene is not practiced, the bacteria in the mouth form plaque on the teeth.  These bacteria may cause the gums to become inflamed, which results in red, swollen, or bleeding gums. For many people with gingivitis, this inflammation is not painful. If detected early, gingivitis can be reversed and healed with proper oral hygiene. But left untreated,  gingivitis can worsen and ultimately lead to tooth loss. Medical attention is advised in case of the following symptoms, even if discomfort is not observed.

When gingivitis progresses, it develops into periodontitis; a condition in which the gums and the bone that hold the teeth in place are severely weakened. The bacteria on the teeth release toxic substances that harm the gums and cause them to become infected. The infection may spread into the jaw bone and the disease may be presented as exceptionally swollen, painful gums that are likely to bleed. If left untreated, periodontitis can lead to tooth loss.

Gum disease can occur at any age, but it is most common among adults. If detected in its  early stages, gum disease can be reversed on early notice of any of the following symptoms:

The early stages of gum disease can often be reversed with proper brushing and flossing.  Good oral health will help keep plaque from building up. Professional cleaning by the dentist or hygienist is the only way to remove plaque that has built up and hardened into tartar. The dentist or hygienist cleans or “scales” the teeth to remove the tartar above and below the gum line. If the condition is more severe, a root planning procedure may be performed. Root planing helps to smooth irregularities on the roots of the teeth making it more difficult for plaque to deposit there.

In many instances, swollen and bleeding gums are a sign of gum disease. However, other factors could cause gum problems. Whatever be the cause of sore, painful gums, some steps can minimize gum damage and discomfort.

In the quest to keep teeth clean, one might be tempted to brush teeth as vigorously.  Gums are made of delicate tissue, though, so brushing the wrong way could damage them.  Whether one opts for a manual or electric toothbrush, one with soft nylon bristles with blunted ends is the best choice. Brushes with medium or hard bristles, may damage the teeth enamel, teeth or cause red and swollen gums. Use of gentle, circular motions to massage and clean the teeth and gums avoids damage. While many people use a back-and-forth motion,  this motion can irritate and damage the gums, making them sore and more likely to bleed or recede.

Flossing every day may help remove plaque from places where the toothbrush can’t reach. Flossing should be done gently to avoid causing swollen or bleeding gums. Rather than forcing the floss between the teeth slide it up and down carefully following the curve of each tooth. Floss at least once a day and beyond the gum line to remove more plaque is advised.