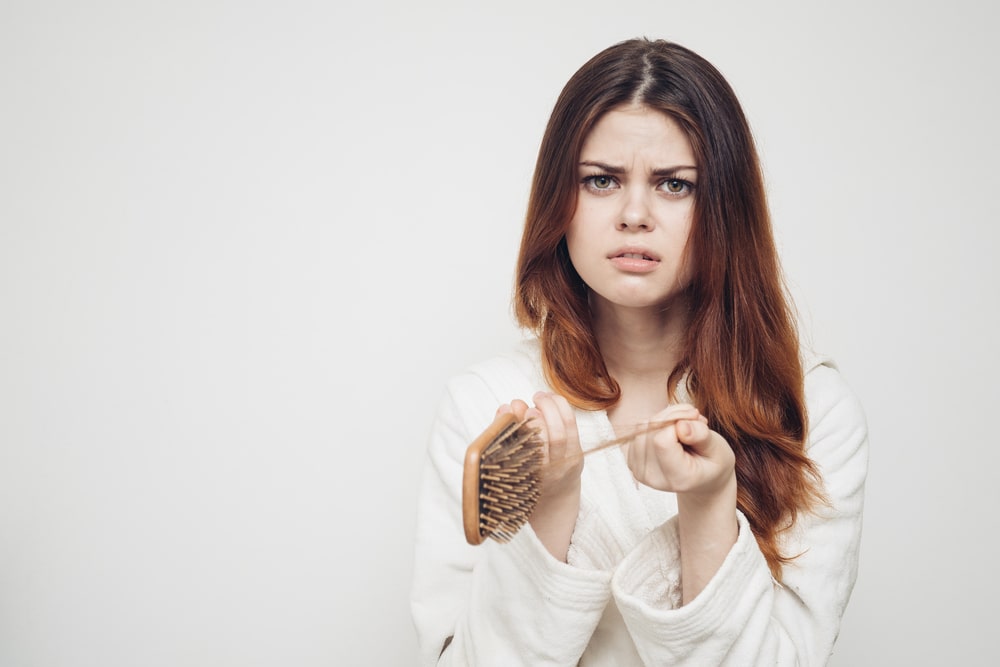 It is also known as alopecia or baldness, which refers to a loss of hair from part of the head or body. The severity of hair loss can vary from a small area to the entire body; typically, the head.

Normally, hair goes through a regular growth cycle. During the anagen phase, which lasts two to six years or longer, the hair grows. During the telogen phase, which lasts about three months, the hair rests. At the end of the telogen phase, the hair falls out and is replaced by new hair. The average person loses about 100 hairs each day. It also can have other causes, including drugs or disease. Common types include: male-pattern hair loss, female-pattern hair loss, alopecia areata, and a thinning of hair known as telogen effluvium (Table.1).

Other health conditions that can cause excess hair loss include:

Treatment of pattern hair loss may simply involve accepting the condition. Therapeutic intervention that can be tried includes the medication(s) minoxidil or finasteride, and hair transplant surgery. Alopecia areata may be treated by steroid injections in the affected area but this needs to be frequently repeated to be effective. Pattern hair loss by the age of 50 affects about half of the males and a quarter of females. About 2% of people develop alopecia areata at some point in time.

Less common causes of hair loss without inflammation or scarring include the pulling out of hair called traction alopecia. A cosmetic hair problem; is the weakening and breakage of the hair along its shaft. This can lead to a multitude of hair fiber problems such as breakage, knotting, splitting, and dullness. There are many causes of traction alopecia. One of the most common is the damage to or absence of the cuticle or outside layer of the hair. The hair, sometimes already weakened by chemical applications, can be easily broken by friction or by tension. Prolonged tension could even induce follicular inflammatory changes, which may eventually lead to scarring. Traction alopecia can be aggravated by vigorous brushing, blowdrying or incorrect massage techniques. Certain hair care practices, such as wearing tight ponytails or weaves, or regularly bleaching or perming the hair, can also lead to hair loss. Some people compulsively pull out their hair. This psychological disorder is called trichotillomania. As traction alopecia is mostly caused by hair breakage, any genetic condition that causes structural defects to the hair shaft, making the fiber weaker, can cause the hair to be more susceptible to fracture.

The best treatment for traction alopecia hair loss is to either stop or reduce the frequency of chemical processing. Also, change your styling habits to lessen the chances of damage.  Sometimes, a hair strengthening or conditioning treatment can be useful to help to reduce the problem of traction alopecia. Depending on the stage that the hair loss caused by traction alopecia has reached, it is possible to grow some hair back and stop any further hair loss, as long as no further tension is applied to the areas. A topical preparation of high strength minoxidil forms the basis of a comprehensive hair loss treatment program (for both men and women) and includes hair regrowth boosters (medroxyprogesterone/ azelaic acid/ caffeine). These are added to block dihydrotestosterone (DHT), which destroys hair follicles in both men and women. These products are particularly beneficial for women, who are unable to use Finasteride 1 mg. As with all unproven products, medroxyprogesterone and azelaic acid are not recommended as an individual-solutions to hair loss. Once the follicles affected by Traction alopecia have ceased to produce hair, treatment will not be effective.  This will be the case if the hair has been under large amounts of strain for many years and the areas of traction alopecia hair loss are completely bald (these areas will appear shiny).  However, the treatment for traction alopecia should be tried for a minimum of three months.