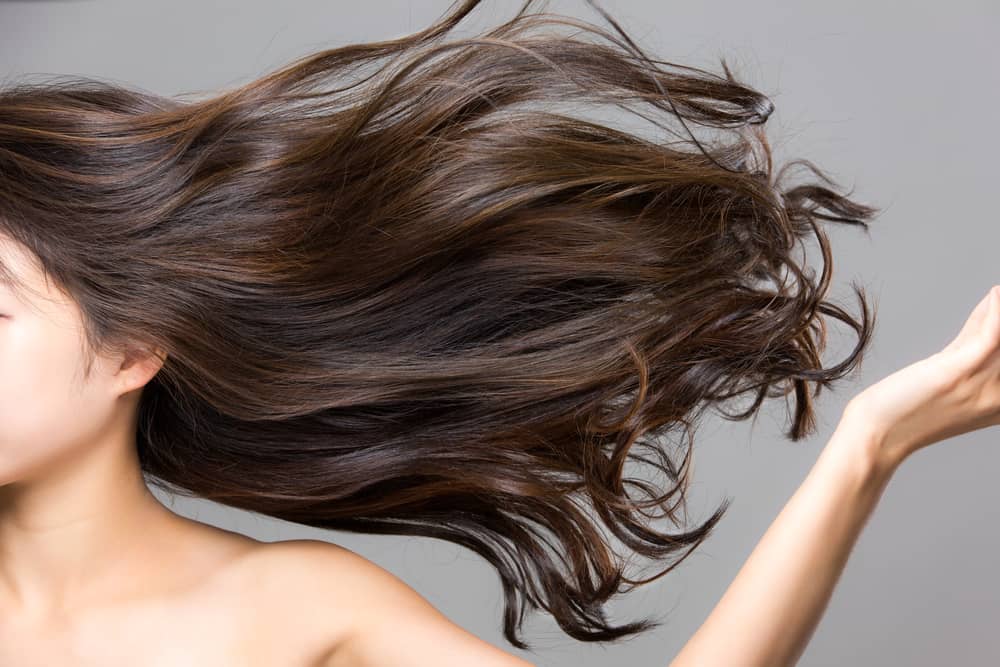 Hair Tensile Strength: Human hair is made of a protein called keratin; a polyamide molecule with many disulfide bridges between the chains which give the hair its strength and stiffness. The main physical properties of the hair depend mostly on its geometry. The physical and mechanical properties of hair involve characteristics to improve elasticity, smoothness, volume, shine,  and softness due to both the significant adherence of the cuticle scales and the movement control (malleability), as well as the easiness of combing since they reduce the fibers static electricity. The evaluation of these effects on hair may be carried out by several methods,  as optical and electron microscopy, mechanical resistance measuring, shine evaluation, and optical coherence tomography.

The color of hair is due to eumelanin [fair hair if in low concentrations or brown and black if higher] or pheomelanin [a yellow-red color giving rise to redheads and freckles].  Grey hair lacks either of the coloring pigment.

Threads present remarkable structural differences, according to the ethnic group, and within the same group. These properties are related to fiber characteristics and cosmetic attributes. Among the first ones we have: resistance, elasticity, diameter, bending, color, and shape of the cross-section. Despite depending on thread characteristics and the morphological component’s integrity, cosmetic properties are: shine, combing, volume,  malleability, retention of styling, and ability to fly away. Hair has a particular genetic nature. We may handle it and applying on its products to mimic differences of the touch sensorial characteristics. These are, however, transient effects.

Physical and Mechanical Properties of the Hair Fibers

Hair is surprisingly strong. Cortex keratin is responsible for this property and its long chains are compressed to form a regular structure which, besides being strong, is flexible.  The physical properties of hair involve: resistance to stretching, elasticity, and hydrophilic power.

Resistance to stretching: In general, the weight needed to produce a natural hair thread rupture is 50-100 g. An average head has about 120,000 threads of hair and would support about 12 tons. The resistance to breakage is a function of the diameter of the thread, of the cortex condition, and it is negatively affected by chemical treatments.

Hair elasticity: Hair fiber has an elastic characteristic, and it may undergo moderate stretching, either wet or dry. Stretching is a hair attribute under the action of a distal force  (length) and the thread returns to the original status when this force stops acting. When dry,  the hair thread may stretch 20-30% of its length; and, in contact with water, this may reach up to 50%. In contact with ammonia, it becomes more elastic. Chemical and physical treatments, sun exposition, and the use of electric dryers and heated plates affect this property.

The strength of hair will depend to a large extent on the nature of the intermolecular bonds, the stiffer the hair, the higher will be its tensile strength. For a healthy individual with no hair diseases, the hair fiber is very strong with tensile strength around  1.6 × 10–9 N/m2. That makes hair about as strong as copper wire of the same diameter. So hair is incredibly strong and it also has elastic properties. It can stretch up to 20% of its original length before breaking when it is dry and when it is wet, it may stretch up to 50%  before breaking. So how does hair break if it is so strong? It depends on the speed at which the pulling force, is applied to the hair. If the hair is pulled slowly and steadily with a gradual increasing force it will resist for quite some time before breaking. But if sudden force is applied, it will break. The tensile strength of the hair is reduced, the hair has no time to respond and stretch, which distributes the force over the length of the hair fiber, and the hair just snaps. So despite the apparent strength of hair, it will break if brushed or combed too vigorously because this applies a sudden force to the hair. The strength of hair is evaluated by a tensile test or tension test.

A tensile test, also known as a tension test, is probably the most fundamental type of mechanical test. Tensile tests are simple, relatively inexpensive, and fully standardized. By pulling on something, one can very quickly determine how the material will react to forces being applied in tension. As the material is pulled, one can find its strength along with how much it will elongate.

As pulling continues until the material breaks, a good, complete tensile profile is obtained. A curve depicts how the material has reacted to the forces being applied. The point of failure is of much interest and is typically called its “Ultimate Strength” or UTS in Fig.1.

For most tensile testing of materials, in the initial portion of the test, the relationship between the applied force, or load, and the elongation the specimen exhibits is linear. In this linear region, the line obeys the relationship defined as “Hooke’s Law”  where the ratio of stress to strain is a constant, or σ/ ε = E, where E is the slope of the line in this region where stress (σ) is proportional to strain (ε) and is called the “Modulus of  Elasticity” or “Young’s Modulus”.

The modulus of elasticity is a measure of the stiffness of the material, but it only applies in the linear region of the curve. If a specimen is loaded within this linear region, the material will return to its same condition if the load is removed. At the point that the curve is no longer linear and deviates from the straight-line relationship, Hooke’s Law no longer applies and some permanent deformation occurs in the specimen. This point is called the “elastic, or proportional limit”. From this point on in the tensile test, the material reacts plastically to any further increase in load or stress. It will not return to its original, unstressed condition if the load were removed.

The amount of stretch or elongation the specimen undergoes during tensile testing can be expressed as an absolute measurement in the change in length or as a relative measurement called “strain”. This is the maximum load the specimen sustains during the test.  The UTS may or may not equate to the strength at break. The instrument used for testing tensile strength is the Tensile tester (Fig.2).

Two vises apply tension to a specimen by pulling at it, stretching the specimen until it fractures. The maximum stress it withstands before fracturing is its ultimate tensile strength.

Tensile strength is defined as stress, which is measured as force per unit area. For some non-homogeneous materials (or for assembled components), it can be reported just as a  force or as a force per unit width. In the International System of Units (SI), the unit is the  Pascal (Pa) (or a multiple thereof, often megapascals (MPa), using the SI prefix mega); or,  equivalently to pascals, newtons per square meter (N/m²). A United States customary unit is pounds per square inch (lb/in² or psi), or kilo-pounds per square inch (ksi, or sometimes kpsi), which is equal to 1000 psi; kilo-pounds per square inch are commonly used in one country (US) when measuring tensile strengths.