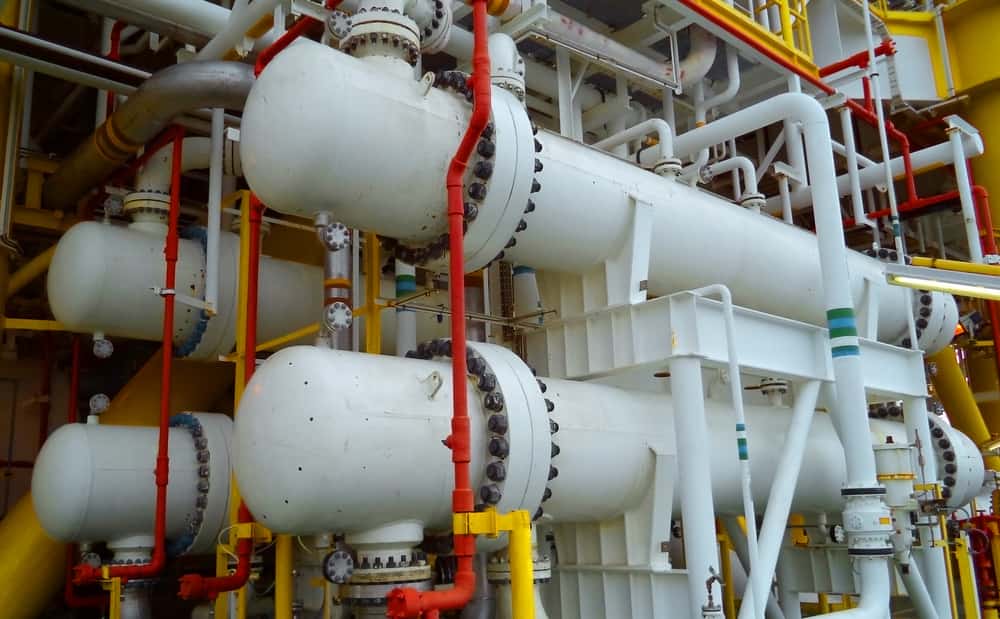 A heat exchanger is a device that allows heat from a fluid (a liquid or a gas) to pass to a second fluid (another liquid or gas) with the two fluids at different temperatures and in thermal contact. In heat exchangers, there are usually no external heat and work interactions. Heat exchangers are classified according to transfer processes, several fluids, and degree of surface compactness, construction features, flow arrangements, and heat transfer mechanisms.

In general, based on the relative flow direction of the two fluid streams heat exchangers are classified into two general classes as follows.

(i) Crossflow exchangers: Both the fluid streams cross each other in space at a right angle, Fig.1(a).

The shell and tube heat exchangers are the most commonly used heat exchangers in the chemical process industries. This type of heat exchanger consists of a bundle of tubes properly secured at the ends of tube sheets. The metal sheets have holes into which the tubes are fixed up to leak-proof joints. The entire tube bundle is placed inside a closed shell in such a way that it forms two immiscible zones for hot and cold fluids. One fluid flows through the tubes whereas the other fluid flows around the outside of the tubes within the space between the tube sheets and is enclosed by the outer shell. The proper fluid distribution of the shell side fluid is achieved by placing baffles normal to the tube bundle. Baffle creates turbulence in the shell side fluid and enhances the transfer coefficients for the shell side flow.

In reality, this type of shell and tube heat exchanger is used in the process industry and is quite complex and is improved in design for thermal expansion stresses, tube fouling due to contaminated fluids, ease of assembling, and disassembling, size, weight, etc. The area available for the flow of the tube side fluid is inversely proportional to the number of passes. Thus, on increasing the number of passes the area reduces, and as a result, the velocity of the fluid in the tube increases, and henceforth the Reynolds number also increases. It results in an increased heat transfer coefficient but it is at the cost of a high-pressure drop. Generally, even numbers of tube passes are preferred for the multi-pass heat exchangers.

In many heat exchangers, the fluids are separated by a heat transfer surface, and ideally, they do not mix or leak. Such exchanges are referred to as direct transfer types.

Exchangers in which there is intermittent heat exchange between the hot and cold fluids via thermal energy storage and release through the exchanger surface are referred to as indirect transfer types.

In an indirect-contact heat exchanger, the fluid streams remain separate and the heat transfers continuously through a dividing wall or into and out of a wall. There is no direct contact between thermally interacting fluids. This type of heat exchanger is also called a surface heat exchanger. These types of heat exchangers can be classified into direct-transfer type, storage type, and fluidized-bed type heat exchangers as described below.

In this type, heat transfers continuously from the hot fluid to the cold fluid through a dividing wall, Fig.5. Although a simultaneous flow of two fluids is required in the exchanger, there is no direct mixing of these fluids because each fluid flows in separate fluid passages. In general, there are no moving parts in most such heat exchangers. This type of exchanger is designated as a recuperative heat exchanger or simply as a recuperator. Recuperator is a form of heat exchanger in which heating air is waste gases.

In the storage type exchanger, Fig.6, both the fluids flow alternatively through the same flow passages and thus the heat transfer is intermittent. The heat transfer surface is generally cellular in structure and is referred to as a matrix or it is a permeable solid material, referred to as a packed bed. When hot gas flows over the heat transfer surface the thermal energy from the hot gas is stored in the matrix wall, and thus the hot gas is cooled during the matrix heating period. As cold gas flows through the same passages later, the matrix wall gives up thermal energy, which is absorbed by the cold fluid. Thus, heat is not transferred continuously through the wall as in a direct-transfer type exchanger, but the corresponding thermal energy is alternately stored and released by the matrix wall. This storage type heat exchanger is also referred to as a regenerative heat exchanger, or simply as a regenerator.

To operate continuously and within a desired temperature range, the gases, headers, or matrices are switched periodically so that the same passage is used for hot and cold gases. The actual time required for hot gas to flow through a cold regenerator matrix is called the hot period or hot blow. Whereas the time required for cold gas to flow through the hot regenerator matrix is called the cold period or cold blow. It is not necessary to have hot- and cold-gas flow periods of equal duration. There is some unavoidable carryover of a small fraction of the fluid that remained in the passage to the other fluid stream after switching of the fluids; this is known as carryover leakage. If the hot and cold fluids are at different pressures, the leakage is from the high-pressure fluid to the low-pressure fluid past the radial, peripheral, and axial seals, or across the valves, referred to as pressure leakage. These leakages being unavoidable, regenerators are used exclusively in gas-to-gas heat and mass transfer applications with sensible heat transfer. In some applications, regenerators may transfer about 5% moisture from humid air to dry air.

(i) Liquid-liquid exchanger: In this type, two immiscible fluid streams are brought into direct contact. These fluids may be single-phase fluids, or they may involve condensation or vaporization. For example, condensation of organic vapors and oil vapors with water or air.

(ii) Gas-liquid exchangers: In this type, one fluid is a gas (usually air) and the other a low-pressure liquid (commonly, water) and is readily separable after the energy exchange. In either cooling of liquid (water) or humidification of gas (air) applications, liquid partially evaporates and the vapor is carried away with the gas. In these exchanges, more than 90% of the energy transfer is by mass transfer due to the evaporation of the liquid and convective heat transfer is a minor mechanism. For example, water cooling tower with forced- or natural-draft airflow, air-conditioning spray chamber, spray drier, spray tower, and spray pond.

In this type, steam is partially or fully condensed using cooling water, or water is heated with waste steam through direct contact in the exchanger. Non-condensable and residual steam and hot water are the outlet streams. For example, de-superheaters and open feedwater heaters (de-aerators) in power plants.