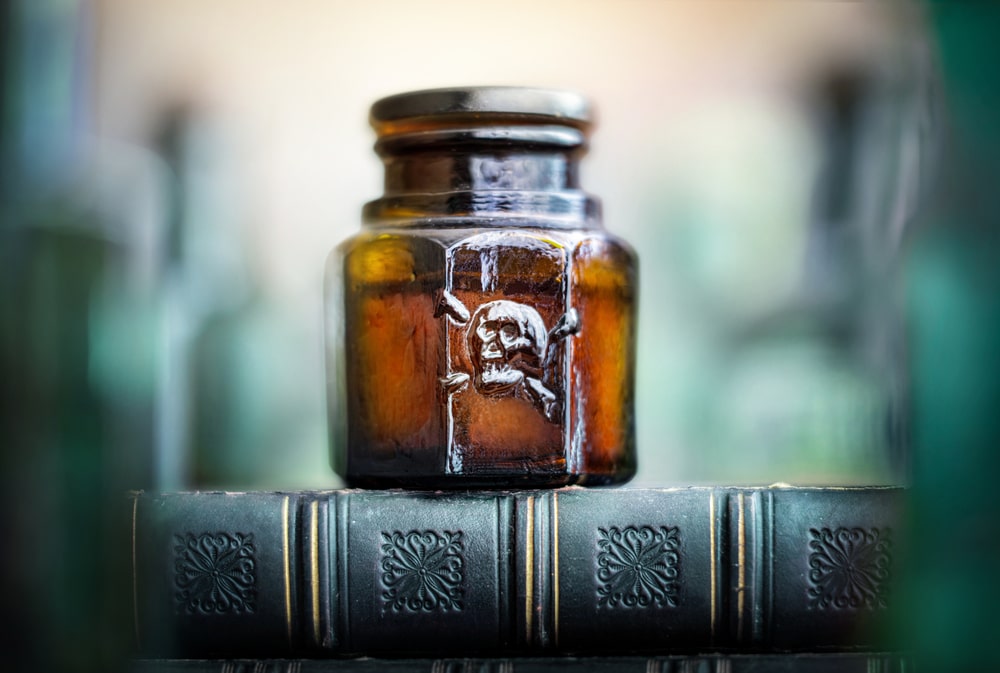 To function in various physiological activities smoothly and in a co-ordinated fashion, several metals are essential. Depending upon their need, some are required in appreciable quantity whereas some metals are needed in trace amounts. Due to some reasons, if the concentration of metals in the biophase exceeds that is required, toxic effects start appearing. These toxic effects can be accounted for based on the interaction of the metal with specific functional groups (ligands) on the macromolecules (i.e. enzymes or receptors) in the cells. Due to this interaction, the macromolecule can not catalyze the functions, vital to the existence of the cell. Metal generally interacts with functional groups like amino, carboxyl, phenolic, phosphoric, and sulfhydryl moieties. The interaction with such vital functional groups (ligands) leads to disruption of energy production and ion regulation.  Adverse reactions of metals are also reported. For example, heavy metals like cadmium, lead, mercury, arsenic, tin, and cobalt can lead to immunosuppressive effects. Similarly arsenic, chromium, and nickel may cause cancer in humans.

In the treatment of intoxication due to heavy metals, chelating agents play a dominating role. All such compounds that can form complexes (chelates) with heavy metals and have a common property to prevent or reverse the binding of metallic cations to body ligands are collectively referred to under the term, chelating agents. Chelating agents generally consist of N, O, or S as ligand atoms. The ligand atoms entrap the metal ion and form a complex with it by co-ordinate bonds. The bond is often indicated by an arrow. The head of an arrow is directed away from the atom (ligand) which donates the electron pair needed for the formation of the bond. The stability of the chelate (complex) formed varies with the metal and ligand atoms. A large number of drugs can form metal chelates. A chelate formation may be a part of their mechanism of action against the diseases for which they are intended.

(a) Arsenic Poisoning:  Arsenic as such is not needed for the body. It does not catalyze any biological function.  It is the trioxide form, in which arsenic is usually present. The most severe form of arsenic toxicity involves erythrocyte hemolysis. Similarly, kidney and liver damage may occur.  Dimercaprol, a chelating agent, may be used in the treatment of arsenic poisoning.

In toxic symptoms, arsenic can cause uncoupling of mitochondrial oxidative phosphorylation. This uncoupling is known as aminolysis, Since it inhibits the functioning of many vital enzymes, almost every important organ is affected by arsenic poisoning. Besides dimercaprol, oral penicillamine may also be given to treat the poisoning. But to treat severe arsenic-induced nephropathy, renal dialysis is the only solution.

The most deadly form of arsenic is arsine gas (AsH3). Arsenic exists in three metallic forms: alpha (α) (yellow), beta (β) (black), and gamma (γ) (grey). Arsenic interferes with cellular respiration by combining with the sulfhydryl groups of mitochondrial enzymes. It interferes with glycolysis. Within 30 minutes of exposure, there is a metallic taste in the mouth with a slight odor of garlic on the breath. Sources of toxicity include tobacco, seafood, environmental (found in insect poisons), skin contact (some linseed oils), and drinking water. Toxicity symptoms include nausea, vomiting, abdominal pain, excessive salivation, diarrhea, headache, kidney failure, muscle paralysis, progressive blindness, and mental impairment.

The common laboratory tests include tissue examination (arsenic deposits mainly in nails and hair), blood analysis (to check serum arsenic levels), and urine spot test (using chelating agents like EDTA). Normally, the blood levels of arsenic should be less than 50 micrograms per liter. In poisoning cases, it may go to several hundred micrograms per liter. In acute poisoning, an ECG can reveal arrhythmias. A plain abdominal X-ray may show opacities in the stomach due to the presence of arsenic.

The first step in treating any heavy metal toxicity is to identify the toxic element and begin its removal process. The important steps of the therapy are:

(b) Mercury Poisoning:  Mercury constitutes an important part of the chemical structure of many diuretics, antiseptics, antibacterials, and laxatives. It has a high affinity for sulfur. Hence mercury readily forms covalent bonds with sulfhydryl groups and inactivates the enzymes containing the sulfhydryl group. Thus, the presence of mercury can easily retard normal cell metabolism.

Dimercaprol and penicillamine which contain a sulfhydryl group can be routinely used to treat intoxication due to either inorganic or elemental mercury. N-acetyl-D and L-penicillamine appear to be more potent and safer than the former agents. In severe cases, hemodialysis may also be employed.

Mercury poisoning (mercurialism) occurs due to the exposure of the patient to mercury (in its elemental form), inorganic mercury salts, or organomercury compounds. The sources of exposure include ingestion of contaminated food and water, breathing contaminated air, industrial sources (mercury mining and smelting), organic mercurial pesticides, crematoriums, waste incinerators, and volcanoes.

The therapy of mercury poisoning includes:

Sources of sulfur such as lipoic acid and garlic are useful in mercury toxicity.

(c) Lead Poisoning:  Human exposure to lead is primarily from food, environmental and industrial sources. It is mainly absorbed into the circulation of GIT and the respiratory system. In the body lead is mainly deposited in the liver, kidney, and bones. Chronic exposure to lead results in gastrointestinal, neuromuscular, CNS, hematological and renal toxicities.

Lead as such is not essential for life. The intoxication of lead can be treated by using one of the three chelating agents: Edetate calcium disodium (CaNa2 EDTA), dimercaprol, and D-penicillamine. The lead-EDTA complex is non-toxic, and water-soluble and hence is rapidly excreted. Usually, at the start, the combination of edetate calcium disodium and dimercaprol is used. This is followed by oral penicillamine, which continued for a long term.

Lead accumulates slowly in the body and even at low doses, it may lead to poisoning.  The major fraction of lead gets deposited in the bones and teeth while in blood, it accumulates with erythrocytes. Plain X-ray may show transverse lines in tubular bones suggesting arrested bone growth due to prolonged lead exposure, X-ray fluorescence is a sensitive method of detecting low levels of lead in the body.

The blood level of lead should be less than 100 mcg/L. The toxicity symptoms start appearing when it goes in the range of 500 − 100 mcg/L.

The important steps of therapy include:

Chelation therapy should be gradually withdrawn:

(d) Cadmium Poisoning:  It occurs in nature in association with zinc and lead. After absorption, the kidney retains a higher concentration of cadmium than any other tissue. This accumulation leads to renal tubular damage. The liver also shoulders considerable deposition of cadmium.

Intoxication leads to nausea, dizziness, diarrhea, chest pain, and irritation of the upper respiratory tract. Treatment commences with respiratory support and steroidal therapy.  A chelating agent like edetate calcium disodium can be used whereas, dimercaprol should not be used, due to its nephrotoxicity. Vitamin D is recommended for the treatment of associated orthopedic problems.

(e) Iron Poisoning: The body has a considerable amount of iron, circulating in the plasma. The plasma circulating iron can not exhibit toxic reactions because of the presence of a natural chelating, agent, transferrin in the blood. It protects the body from the toxic actions of the circulating iron. Iron, if absorbed into circulation in excess amounts, may lead to toxic manifestations.  These include irritation of GIT, pneumonitis, convulsions, and coma. Hepatic damage is also reported to occur.

(f) Cyanide Poisoning:  Even though cyanide does not come under the term “heavy metals”, the treatment of cyanide poisoning deserves special attention. Cyanogenic compounds if ingested orally, may release hydrogen cyanide due to their hydrolysis in GIT. The cyanide ion impairs several vital cellular functions. For example, there occurs impairment of tissue oxygen utilization due to inhibition of the cytochrome oxidase enzyme. The blood runs deficient in oxygen. The patient suffers from hypoxia followed by ataxia, coma, and death.

There is a need for two-fold therapy in the treatment of cyanide poisoning. i.e., (1) the cyanide ions present in the circulation should immediately be converted into a nontoxic form, and (2) attempts should be made to reverse the condition of hypoxia i.e. placing the patient in the oxygen-riched atmosphere and a quick conversion of methemoglobin to hemoglobin should be effected. The treatment involves the use of amyl nitrite by inhalation or sodium nitrite by injection. These agents serve the second purpose. The subsequent intravenous administration of sodium thiosulfate facilitates the conversion of free cyanide ions to nontoxic thiocyanate form. Thiocyanate can readily be excreted in the urine.