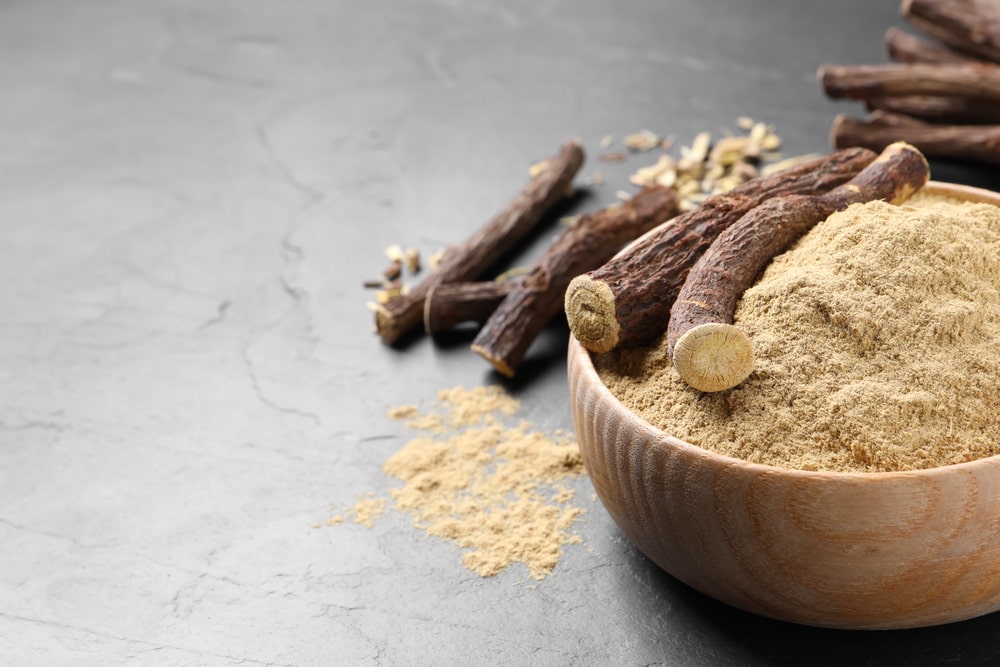 Liquorice is a confection usually flavoured and coloured black with the extract of the roots of the liquorice plant Glycyrrhiza glabra.

Cultivation and Collection of Liquorice

The liquorice is cultivated in Western Europe but the Russian variety and Persian varieties are obtained from wild plants in Russia and Iran. Spanish variety is cultivated abundantly in Spain and Italy. The plant usually grows well in deep sandy soil but the soil should be fertile and near streams. The soil should be well prepared and added with farmyard manures. Liquorice is usually propagated by replanting young pieces of stolons in March.

The stolons may be grown from seeds. The roots are harvested 3 to 4 years after plantation or when they are sufficiently grown. The underground organs are developed to a sufficient extent by the end of the third or fourth year. Then they are dug out in October and washed with water. Some roots are peeled and cut into short lengths before drying. The drug is sun-dried and then shade dried. Many parts of the drug are now used unpeeled. Sometimes sticks or blocks of liquorice roots are made. This is prepared by the process of decoction, the liquid being subsequently clarified and evaporated to the consistency of the soft extracts. The latter is made into blocks or sticks.

Other hydroxyl and deoxy triterpenoid acid related to glycyrrhetinic acid or glycyrrhetic acid have been isolated; the C-20 epimer of glycyrrhetinic acid is named liquiritic acid. The yellow colour of liquorice is due to flavonoids which also have an anti gastric effect. Flavonoid-rich fraction included liquiritin, isoliquertin (a chalcone) which occurs as a glycoside and during drying partly converted into liquiritin, liquiritigenin and isoliquiritigenin.

Isoliquiritigenin is reported to be an aldose reductase inhibitor and may be effective in preventing diabetic complications. Another active constituent of liquorice is a polysaccharide with a pronounced activity on the reticuloendothelial system. The root also contains 5-15 per cent of sugars about 1-2 per cent of asparagine (amide of aspartic or amino succinic acid), 0.04 to 0.06 per cent volatile compound, β-sitosterol, starch, protein, bitter principles (glycyramarin). The latter is particularly abundant in the outer tissue and are therefore largely removed in the peeled variety of liquorice. Carbenoxolone is an oleandane derivative prepared from glycyrrhiza and possesses significant mineralocorticoid activity.

Traditionally it is used as a flavouring agent, demulcent and mild expectorant. It is used in the preparation of cough syrups. The flavonoidal content of liquorice i.e. Isoliquiritin possess anti gastric activity so used in peptic ulcer treatment for the healing purpose (in deglycyrrhized liquorice form known as DGL). Isoliquiritin also have antispasmodic activity. The glycyrrhetinic acid possesses mineralocorticoid activity so it is also used in the treatment of rheumatoid arthritis, inflammation Addison’s disease but at high dose, it causes hypertension (due to sodium retention, water retention and electrolyte imbalance). Glycyrrhizin has an anti-inflammatory effect so uses in the treatment of swelling. Ammoniated glycyrrhiza is used as a flavouring agent in beverages, confectionaries and pharmaceutical industries. Another use of liquorice is as a foam stabilizer in fire extinguishers.

Manchurian liquorice derived from Glycyrrhiza uralensis which is chocolate brown and contains glycyrrhizin. Glycyrrhiza glabra var glandulifera is also known as Russian liquorice is used as the substituent. It contains long roots and no stolons. It is purple.