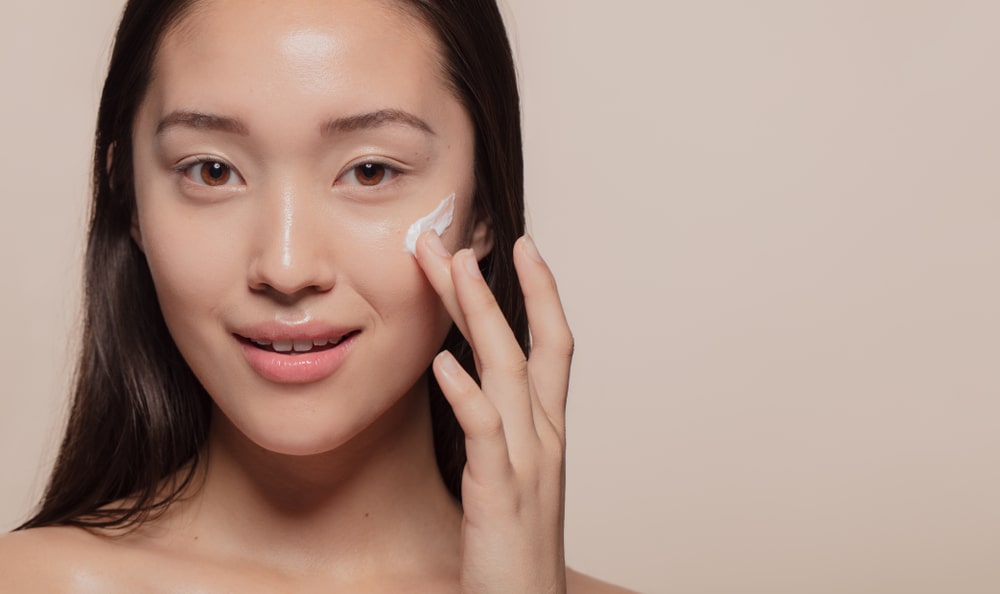 Moisturizer: Dry skin lacks water and there are several ways that cosmetic formulations can temporarily reverse this by a process called moisturization. A preparation can increase the water content of the non-viable epidermis (stratum corneum). Moisturizing creams are applied for the relief of the signs and symptoms of dry skin, leaving it soft and smooth. Earlier moisturizers were formulated primarily with lipids, based on the assumption that fats and oils make the skin soft. In reality, it is difficult to specify exactly how much water content of the skin is required for adequate moisturization. The water content of keratinocytes in the basal layer is about 70%. This decreases to about 15% to 20% as the mature stratum corneum reaches the desquamating layers. Currently, the moisturizing strategy is to:

1. Increase the water-holding capacity of the stratum corneum by external application of hygroscopic ingredients, known as humectants; these ingredients act in the same way as a natural moisturizing factor (NMF) in the skin; some materials used in moisturizers, such as lactic acid and urea, are components of NMF.

2. Hold water in the stratum corneum by deposition of a water-insoluble oily material on the skin surface; these materials are known as occlusive agents; oily materials mimic the effect of the natural lipid bilayers of the skin to restrict evaporation from the surface, that is, petrolatum.

There are several methods of achieving moisturization, the most popular being the use of emollients and humectants.

Application of a thin film of occlusive materials such as oil or waxes makes the skin feel soft and smooth. These materials, commonly known as emollients, often reduce TEWL  (transepidermal water loss) which tends to increase the water content of stratum corneum,  e.g. hydrocarbons, lanolin alcohols.

Humectants are used to improve the moisturization of skin, but there are conditions when humectants may deprive the skin of water. Once a humectant has sorbed water, the activity coefficient of water is lowered. If the water in skin tissue does not have a lower water activity compared to the surrounding humectant-water blend, water molecules will not be transferred to the skin. Glycerin is frequently the humectant of choice for this reason.

These are more complex and try to restore natural moisturizing factors on the skin, such as amino lipids.

Moisturizers prevent and treat dry skin, protect sensitive skin, improve skin tone and texture, and mask imperfections. Moisturizers can be used to prevent the skin from becoming too dry or oily, such as with light, non-greasy water-based moisturizers. Such moisturizers often contain lightweight oils, such as cetyl alcohol, or silicone-derived ingredients, such as Cyclomethicone.

For treating skin dryness, the most appropriate moisturizers are heavier, oil-based moisturizers that contain ingredients such as antioxidants, grape seed oil or dimethicone. For very dry, cracked skin, petrolatum-based products are preferable, as they are longer-lasting than creams and are more effective in preventing water evaporation.

Appropriate moisturizers to keep ageing skin soft and well-hydrated are oil-based ones that contain petrolatum as the base, along with antioxidants or alpha hydroxy acids against wrinkles.

On sensitive skin (which otherwise is susceptible to skin irritation, redness, itching or rashes), it is preferable to use moisturizers that contain soothing ingredients such as aloe,  and that minimize potential allergens such as fragrances or dyes, as well as irritants such as acids.

Two factors have to be considered while assessing the safety of a moisturizer:

A recent study discovered the application of certain moisturizers increases the incidence of skin cancer in high-risk mice, but these animals were subjected to UVB radiation in high doses over a long period before the application of moisturizers. Four popular moisturizers were tested, providing the same result. It is not yet known if the same applies to humans. A fifth moisturizer, specially prepared without mineral oil and sodium lauryl sulphate, has no such effect. Some people are sensitive or allergic to certain chemical components, which can cause irritation, rashes, and other allergic reactions. As with most skin-care products, there is a risk of moisturizers being contaminated with bacteria that can cause disease.

Moisturizing is a very important part of treating acne as moistened skin tends to loosen sebum built up inside pores. A facial moisturizer for acne-prone skin should not contain clogging ingredients like petroleum, mineral oil or silicones like dimethicone. A moisturizer inclusive of alcohol should be avoided as drying out skin to control oil production will only produce more oil that can lead to inflammation. Using moisturizers that are gel, oil-free or water-based are useful. A few ingredients that can be incorporated in a moisturizer to control acne include salicylic acid and benzoyl peroxide. Humectants like glycerin and hyaluronic acid that pull water to the skin to retain its natural moisture, and gentle exfoliants, such as glycolic and lactic acid that help to fade any red or dark spots left behind can also be incorporated in a moisturizer. The alpha-hydroxy acids (glycolic and lactic), should not be coupled with acne treatments containing salicylic acid and benzoyl peroxide as this can irritate and dry skin. Table.2 compiles the cosmeceutical moisturizers.