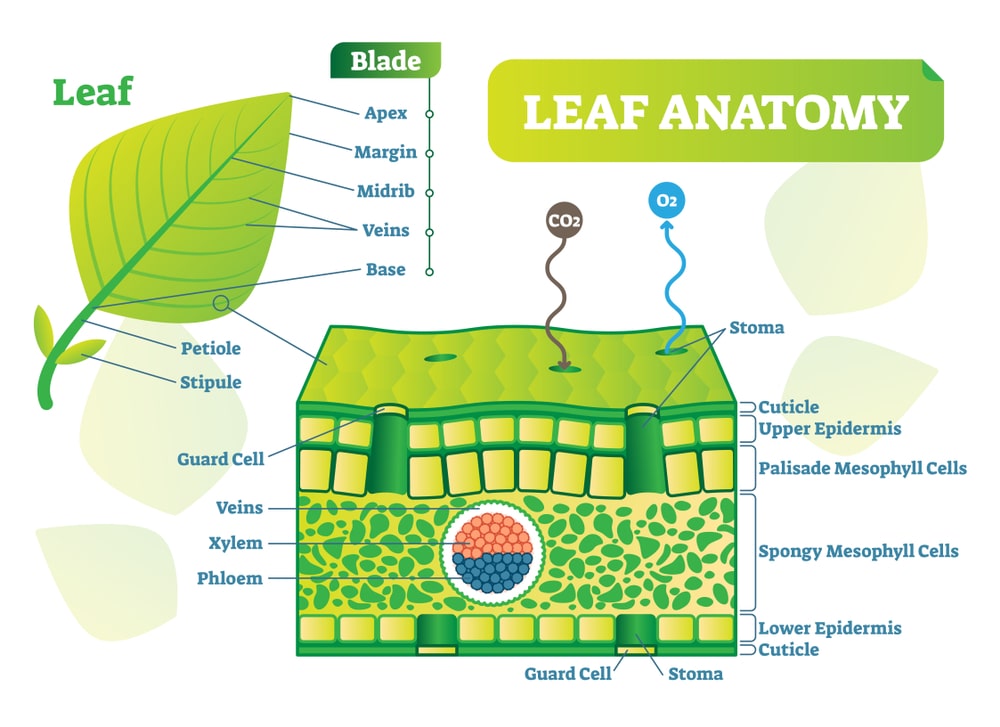 Morphology of Leaves: Leaves are flat, thin green, appendages to the stem, containing supporting and conducting strands in their structure. They develop in such a way that older leaves are placed at the base while the younger ones at the apex.

A typical angiospermic leaf consists of the following parts

(a) Leaf base or hypopodium: Using which it is attached to the stem.

(b) Petiole: It is the stalk of the leaf with which the leaf blade is attached to the stem. It is also known as mesopodium. It may be present in the leaf or may be absent in the leaf. Leaves with petiole are called petiolate, and those without petiole are sessile. They may be short or long and cylindrical. Sometimes, it is flattened as in the case of lemon. Then it is described as a winged petiole. In some plants, the petiole undergoes modification to form the tendrillar petiole which helps the plant to climb, e.g. clematis. In a few aquatic plants, it enlarges to form the swollen petiole by enclosing air and thus keeping the entire plant floating over the water. In a few other cases, the petiole enlarges to such an extent to form the leaf-like structure as in Australian acacia and is known as phyllodes.

(c) Lamina or Leaf blade: The flat expanded part of the leaf is lamina or leaf blade (Epipodium). The lamina may be thick as in xerophytic leaves or thin as in hydrophytes or intermediate as in mesophytes.

Some stipules perform special functions and hence are put into the following types:

There are five types of stipules which are as under:

Before considering the further anatomical details of the leaves, it is very essential to know the basic difference botanically between the leaf and the leaflet which is as under:

The shape of the lamina of leaves

Leaf margin may be of the following types:

The apex of the leaf may be one of the following kinds:

The lower extremity of the lamina of the leaf may exhibit one of the following shapes:

It may be of the following types:

Taking into consideration the nature of the lamina of the leaves, they are classified into two main groups:

1. Simple leaves: A leaf that has only one leaf blade or lamina is called a simple leaf. It may be stipulated or exstipulate, petiolate, or sessile, but always possess axillary bud in its axil. It may have an undivided lamina or may be lobed, e.g. vasaka, digitalis, eucalyptus, datura, Carica, castor, and argemone.

2. Compound leaves: A compound leaf consists of more than one leaf blade or the lamina, the compound leaf is divided into several segments called leaflets or pinnae, e.g. senna, tamarind, acacia.

(b) Palmate compound leaves: In this type, the leaflets are born by the petiole of the leaf.

Depending upon the number of leaflets in a compound palmate leaf they are further divided as:

The arrangement of veins in the lamina or leaf blade is known as venation. Veins are nothing but vascular bundles. Water and minerals absorbed by roots are conveyed to various parts of the leaf by veins and the food synthesized by the leaf by way of photosynthesis is translocated to other parts of the plant through veins only. Veins also offer strength, support, and shape to the lamina of the leaf. The prominent vein in the center of the leaf is known as the midrib. In flowering plants, two types of venations exist: (1) Reticulate and (2) Parallel.

It is the mode of arrangement of leaves on the stem. Since the leaves are the chief organs of photosynthesis they must be exposed to sunlight favorably. This is done by systematically arranging the leaves. Following are the various types of phyllotaxy:

To perform these secondary functions the leaf undergoes structural and physiological changes called modifications. There are at least five types of leaf modifications known.