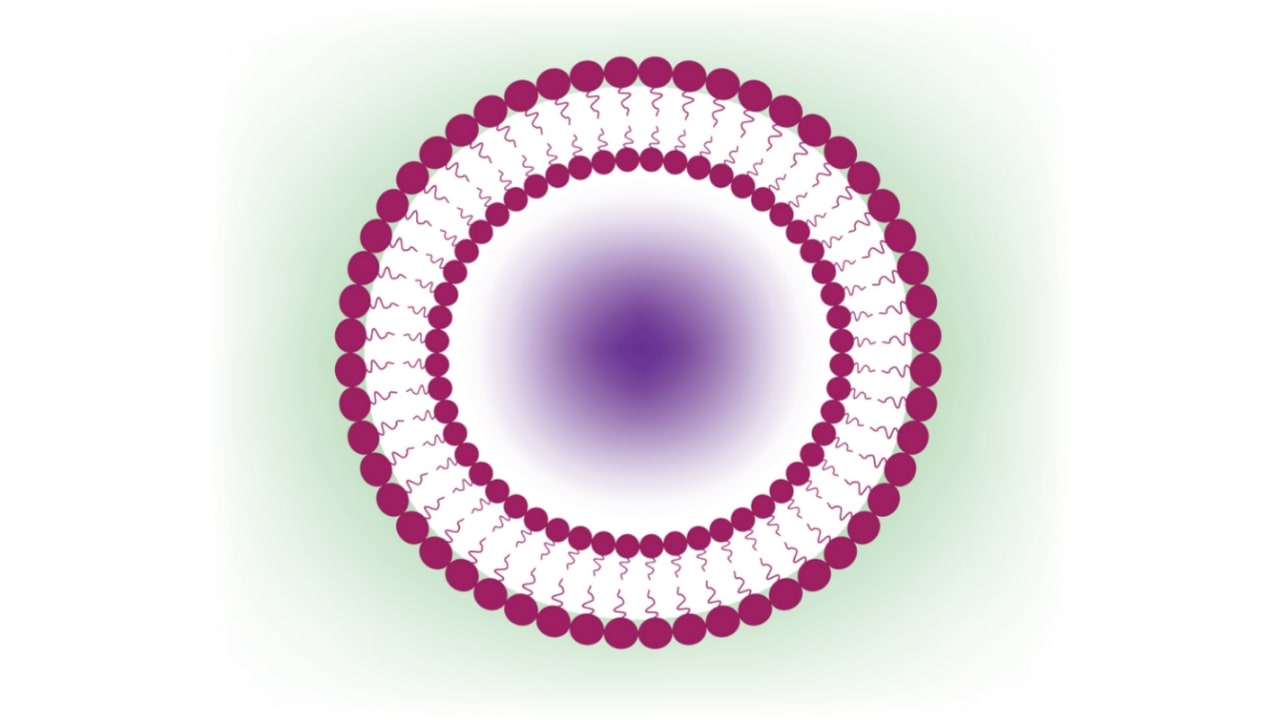 Niosomes are a novel drug delivery system, which entrapped the hydrophilic drug in the core cavity and hydrophobic drugs in the non-polar region present within the bilayer hence both hydrophilic and hydrophobic drugs can be incorporated into niosomes. Niosomes are amphiphilic, in which the medication is encapsulated in a vesicle which is made by non-ionic surfactant vesicles and hence the name niosomes. Their size is very small and microscopic. In the presence of proper mixtures of surfactants and charge-inducing agents from the thermodynamically stable vesicles. Niosomes are mostly studied as an alternative to liposomes because they alleviate the disadvantages associated with liposomes. Niosomes overcome the disadvantages associated with liposomes such as; chemical instability.  The chemical instability of liposomes is due to their predisposition to oxidative degradation and the variable purity of phospholipids. The main purpose of developing a niosomal system is chemical stability, biodegradability, biocompatibility, through various routes such as oral, parenteral, and topical. Niosomes are used as a carrier to deliver different types of drugs such as synthetic and herbal, antigens, hormones, and other bioactive compound.

I. Non-ionic Surfactants: The non-ionic surfactants orient themselves in bilayer lattices where the polar or hydrophobic heads align facing aqueous bulk (media) while the hydrophobic head or hydrocarbon segments align in such a way that the interaction with the aqueous media would be minimized. To attain thermodynamic stability, every bilayer fold over itself as a continuous membrane i.e. forms vesicles so that the hydrocarbon/water interface remains no more exposed.

Mainly following types of non-ionic surfactants are used for the formation of niosomes:

1. Alkyl ethers: L’Oreal described some surfactants for the preparation of niosomes containing drugs/chemicals as:

2. Alkyl esters: Sorbitan esters are the most preferred surfactants used for the preparation of niosomes, amongst this category of surfactants. Vesicles prepared by the polyoxyethylene sorbitan monolaurate are relatively soluble than other surfactant vesicles. For example, polyoxyethylene (polysorbate 60) has been utilized for the encapsulation of diclofenac sodium. A mixture of polyoxyethylene-10-stearyl ether: glyceryl laurate: cholesterol (27: 15: 57) has been used in the transdermal delivery of cyclosporine-A.

II. Cholesterol: Steroids are important components of the cell membrane and their presence in the membrane affects the bilayer fluidity and permeability. Cholesterol is a steroid derivative, which is mainly used for the formulation of niosomes. Although it may not show any role in the formation of the bilayer, its importance in the formation of niosomes and manipulation of layer characteristics cannot be discarded.

Cholesterol steroids are important components of:

In general, the incorporation of cholesterol affects properties of niosomes like; membrane permeability, rigidity, encapsulation efficiency, ease of rehydration of freeze-dried niosomes, and their toxicity. It prevents vesicle aggregation by the inclusion of molecules that stabilize the system against the formation of aggregates by repulsive steric or electrostatic forces that leads to the transition from the gel to the liquid phase in niosome systems. As a result of this, the noisome becomes less leaky.

Some important methods that are used to formulate niosomes are as follows:

1. Ether Injection Method: In this method, a solution containing a particular ratio of cholesterol and surfactant in ether is slowly injected into the preheated aqueous solution of the drugs maintained at 60°C through the specified gauze needle. The vaporization of ether leads to the formation of unilamellar vesicles of the surfactants containing the drug.  Alternatively, fluorinated hydrocarbons have been used as a substitute for ether for thermolabile drugs, as they vaporize at a much lower temperature. The size of niosomes obtained by this method varies between 50-1000 mm, which mainly depends on the formulation variables and experimental conditions.

2. Hand Shaking Method: Firstly, cholesterol and surfactant are dissolved in some organic solvent (like ether, chloroform, benzene, etc.). Thereafter, the solvent is evaporated under reduced pressure in a vacuum evaporator in a round bottom flask which then leaves the mixture of solid surfactant and cholesterols on the walls of the round bottom flask. This layer was then rehydrated with an aqueous solution containing the drug with continuous shaking which resulted in swelling of the surfactant layer. Swelled amphiphiles eventually fold and form vesicles that entrap the drugs. The liquid volume entrapped in vesicles was found to be small i.e. 5-10%.

3. Sonication Method: In this method, at first, the surfactant-cholesterol mixture is dispersed in the aqueous phase. This dispersion is then probe sonicated for 10 min at 60°C, which leads to the formation of multilamellar vesicles (MLV). These MLVs are further ultrasonicated either by probe sonicator or bath sonicator, which in turn leads to the formation of unilamellar vesicles.

4. Reverse Phase Evaporation Method: In this method, the solution of cholesterol and surfactant is prepared in a mixture of ether and chloroform (1: 1). To this, the aqueous solution of the drug is added and sonicated at temperature 4°C-5°C. The solution thus obtained is further sonicated after the addition of phosphate buffer saline (PBS) resulting in the formation of a gel. Thereafter temperature is raised to 40°C and pressure is reduced for the removal of solvent. The PBS has added again and heated on a water bath at 60°C for 10 minutes to yield niosomes.

5. Transmembrane pH Gradient (Inside Acidic) Drug Uptake Process (Remote Loading): According to this principle, the interior of the niosome has a lower pH value (acidic pH) than the outer side. The added unionized basic drug crosses the niosome membrane but after entering into the niosome it gets ionized in an acidic medium and is unable to leave the niosome and thus, this method increases the entrapment efficiency of such drugs. The acidic pH towards the interior of niosomes acts as an intravesicular trap for the drugs.

6. Extrusion Method: In this method, a mixture of cholesterol and diacetyl phosphate is prepared and then the solvent is evaporated using a rotary vacuum evaporator to leave a thin film. The film is then hydrated with an aqueous drug solution and the suspension thus obtained is extruded through the polycarbonate membrane (mean pore size 0.1 mm) and then placed in series up to eight passages to obtain uniform size niosomes.

7. Microfluidization Method: In this method, two fluidized streams (one containing drug and the other surfactant) interact at ultra-high velocity, in precisely defined microchannels within the interaction chamber in such a way that, the energy supplied to the system remains in the area of niosomes formations. This is called the submerged jet principle. It results in better uniformity, smaller size, and reproducibility in the formulation of niosomes.