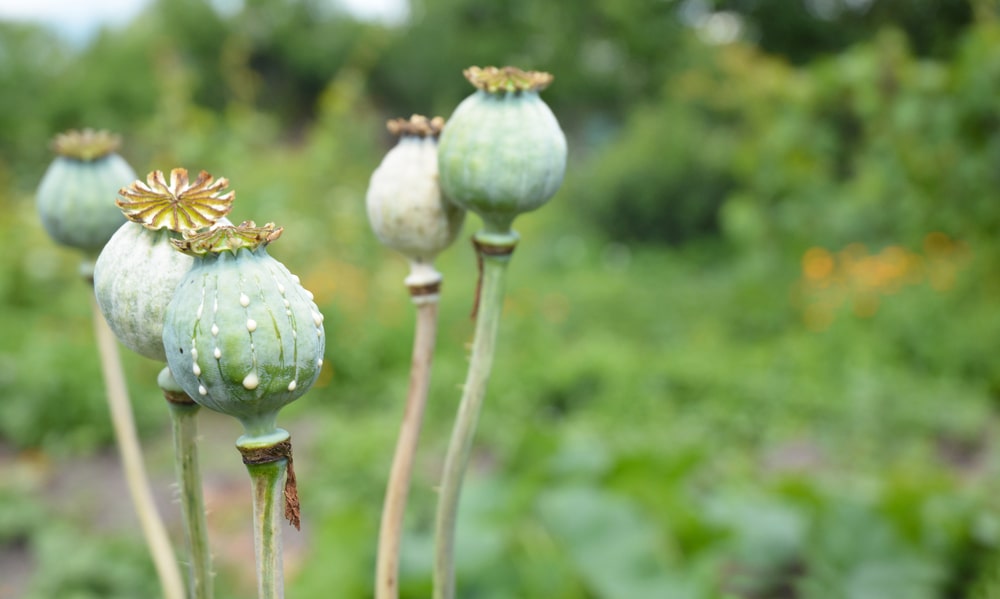 Opium is a highly addictive narcotic drug acquired in the dried latex from the opium poppy (Papaver somniferum) seed pod.

Cultivation, Collection, and Preparation of Opium:

There are more than 50 different species that exist in the genus Papaver. Out of which six species are found in India like P. nudicaule, P. rhoeas, P. argemone, P. dubium P. somniferum, and P. Orientale.

It is an erect plant having 60-110 cm in height approximately. It is branched having linear-oblong or ovate-oblong leaves, bluish-white, violet, or purplish flowers. Cultivation of opium is mainly done in certain regions like Madhya Pradesh, Punjab, Rajasthan, and Uttar Pradesh under government supervision. The yield depends upon weather conditions. It grows well in a temperate climate. It can also grow well in the winter season but extreme cold and frost adversely affect the plant and yield of opium. The cool weather (without freezing temperature and fog or cloudiness) with full sunshine favours the growth of the plant and gives better yield. It grows in November to March months. The propagation is mainly done by seeds sowing (generally 3-4 kg seeds per hectare are required). The seeds are mixed with sand (1:3) and sown in the soil. The well-drained loamy soil is preferred for cultivation. The soil should have a pH of 7 for better cultivation. Organic matters and fertilizers are supplied for cultivation. The distance should be 25 cm in between two plants. The plant reaches up to one-meter height.

During the maturity period, the capsule exudes maximum latex which shows a colour change from dark green to light green. Such capsules are incised vertically in the afternoon with the help of specific needle shape apparatus called Nushtur. Latex exudes out and thickens due to cold weather at night which is eventually scrapped and collected the next morning by an iron scoop called enarpala. The incision is repeated 4 times. Latex is collected in a plastic container. The capsules are collected and dried in open areas and further the seeds are separated by beating.

Table.1: Commercial varieties of opium and their appearances

Opium contains more than 30 alkaloids which are largely combined with the organic acid meconic acid. The drug also contains sugar salts, albuminous substances, colouring matter and water. Six principle alkaloids are Morphine, Codeine, Thebaine, Noscapine (also known as narcotine), Narceine, Papaverine. The first group consists of phenanthrene nucleus (morphine groups) whereas these of the papaverine group have benzylisoquinoline structure. Morphine molecules have both phenolic and alcoholic hydroxyl groups and when acetylated forms diacetylmorphine or heroin. Codeine is an ether form of morphine (methyl morphine). Meconic acid is dibasic and easily detected either in Free State or meconate by the formation of deep red colour on the addition of ferric chloride. Less important opium alkaloids (protopine and hydrocotarine) are different structural types.

It is used as a hypnotic, sedative and analgesic but has addiction property so given in severe pain or if the patient does not show response to other analgesics. It stimulates the chemoreceptor zone in the medulla which leads to nausea and vomiting. Codeine (mild analgesic which is potent to aspirin) relieves local irritation in the bronchial tract and is an antitussive. Papaverine has smooth muscle relaxant activity. Narcotine (or Noscapine) is used in cough preparations due to its depressant action on the cough reflex. Diacetyl morphine is also known as Heroin has more narcotic analgesic effects than morphine.

The adulterated forms show the presence of Opium capsules in powdered form, gum and sugary fruits. Generally, opium is not found to be adulterated due to the production done under Governmental control.