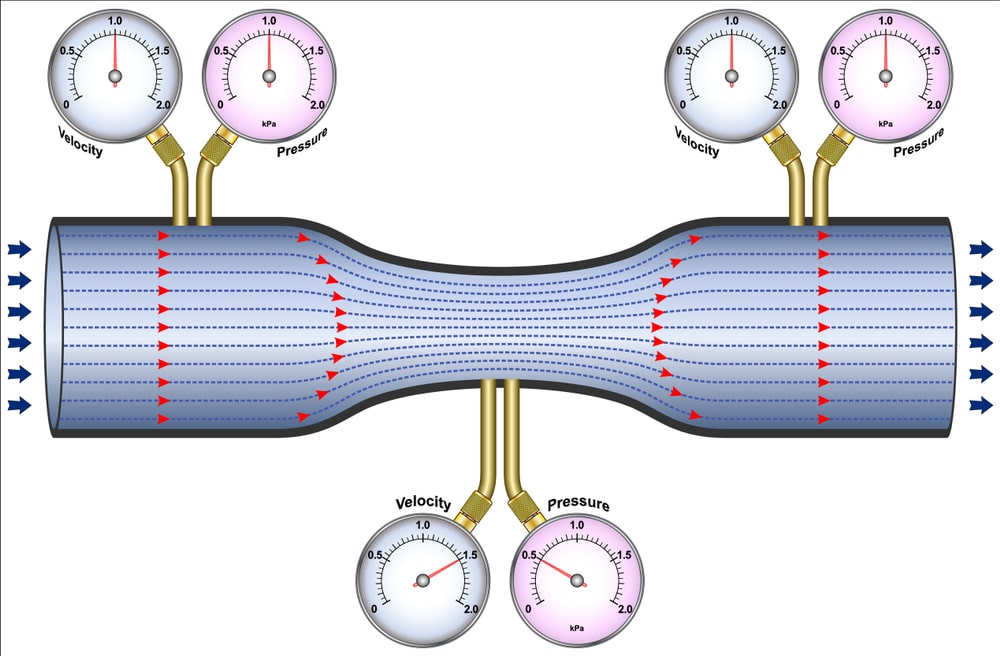 Orifice Meter: The orifice meter is made up of stainless steel, prosper bronze, nickel, and more. An orifice meter provides a simpler and cheaper arrangement for the measurement of flow through a pipe. The orifice is a thin circular plate with a sharp-edged concentric circular hole in it. The main part of an orifice flow meter is a stainless steel orifice plate that is held between flanges of a pipe carrying the fluid whose flow rate is being measured. An orifice plate is fitted between the flanges which are at a certain distance. To maintain laminar flow conditions, the pipe carrying the fluid is straight. Openings are provided at two places (a) and (b) for attaching a differential pressure sensor (U-tube manometer, a differential pressure gauge) as shown in Fig.1. The area (A0) of the orifice is much smaller than the cross-sectional area of the pipe. The flow from an upstream is uniform and adjusts itself in such a manner that it contracts until a section downstream the orifice plate is reached at vena contracta (b) and then expands to fill the passage of the pipe. The vena-contracta length depends on the roughness of the inner wall of the pipe and the sharpness of the orifice plate. One of the pressure tapings is provided at a distance equal to the diameter of the pipe upstream to the orifice plate where the flow is almost uniform (a) and the other at a distance of half a diameter of the pipe to downstream the orifice plate.

Considering the fluid to be ideal and the downstream pressure taping to be at the vena contracta, we can write, by applying Bernoulli’s theorem between (a) and (b) as

where, P*1 and P*2 are the piezometric pressures at (a) and (b), respectively. From the equation of continuity,

where A2 is the area of the vena contracta. With the help of equation (1), equation (2) can be written as,