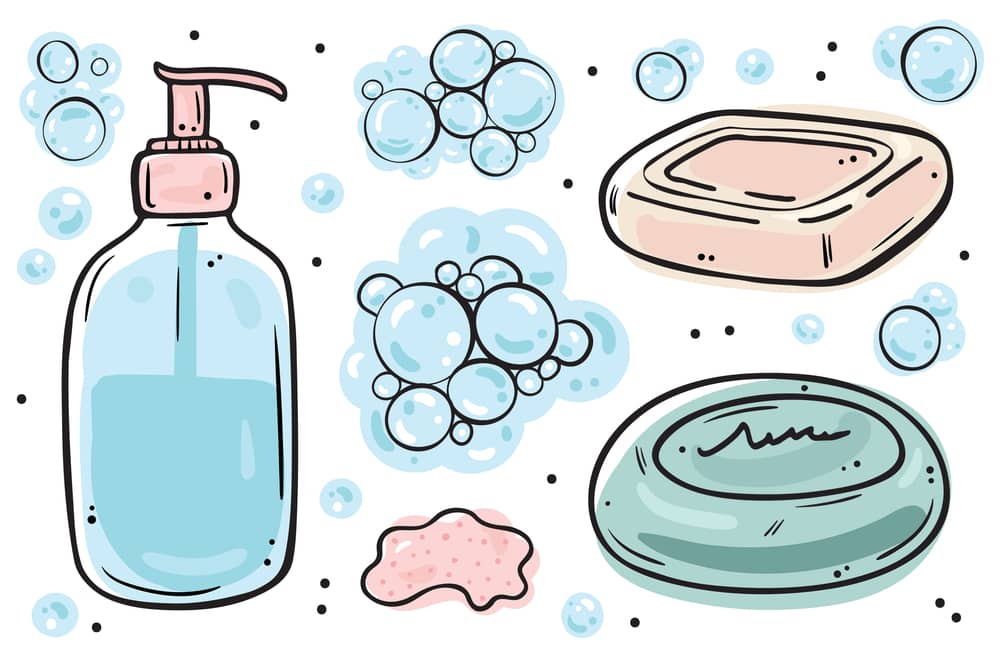 By definition, soaps are water-soluble sodium or potassium salts of fatty acids. Soaps are made from fats and oils, or their fatty acids, by treating them chemically with a strong alkali.

Not every product marketed as soap meets the FDA’s definition of the term. FDA interprets the term “soap” to apply only when:

Products that meet this definition of soap are regulated by the Consumer Product Safety Commission (CPSC), not by FDA. If a product intended to cleanse the human body does not meet all the criteria for soap, as listed above, it is either a cosmetic or a drug.

Soap is made by mixing an alkali (lye/caustic) with oil or fat in a process known as saponification. In this chemical reaction, the triglyceride oils/fats are first hydrolyzed into free fatty acids, these then combine with the alkali to form crude soap or base soap. This is a mix of various soap salts, excess fat or alkali, water, and liberated glycerol (glycerin). The glycerin is a useful by-product from soap production, although can be left in the soap product as a softening agent. The fat oils can be used in the correct ratio that enables the soap bar to physically form and set. This ratio can then be adjusted to give a bar that lasts longer and doesn’t lather, or foam higher and dissolves quicker. The typical ratio is 80: 20 with Palm (Hard 80) and Palm Kernel (Soft 20). A vast array of oils are used in soap manufacture, however, most suppliers will use a standard range of vegetable oils like palm oil, palm kernel oil, coconut oil, and olive oil.

In modern commercial soap making, the fats and oils are often hydrolyzed with super-heated steam. The fatty acids then are neutralized to make soap. The process takes place in a large cylindrical vessel. The next step in the manufacture of soap is called graining or “Salting out”. This involves the addition of common salt (NaCl). During this process, the soap becomes insoluble in brine and separates from the solution. The soap may be washed several times with brine to rid it of free alkali. The molten soap may be run into large frames from which bars may be cut, or it may be run over cold rollers, producing thin sheets which are scraped to form soap chips. The molten soap may also be squirted from a nozzle as a spray into hot air to form powdered soap. Soft or liquid soaps are made by using potassium hydroxide  (KOH) instead of lye. Potassium soap produces a finer lather. They are used alone or in combination with sodium soaps in liquid soaps, shampoo soaps, and shaving creams.

Very often certain foreign materials are added to soap as it leaves the reaction kettle.  These fillers may be such inert adulterants as chalk and sulfates of sodium, calcium, or barium. Other fillers include talc (magnesium acid silicate) and sodium silicate. Silicates give firmness to soap and enable it to hold more water. Rosin is also sometimes added to soap especially to laundry soap. Although not a fatty acid, it reacts with sodium hydroxide to form a sodium salt which resembles soap in many respects. It is soluble and has a high frothing power. The cleansing power of rosin soap is much lower than that of ordinary soap. The presence of rosin in any quantity is undesirable. If soap contains more than 15% rosin, it is known as low-grade soap. Permitted dyes are added to soaps to impart a pleasing color. The most expensive ingredient of toilet soap is perfume, which is responsible for its characteristic odor.

Opaque vegetable origin, high glycerine soap, sold globally is manufactured using vegetable oils. These soaps contain no synthetic ingredients of surfactants; they have a high pH and can in turn in some circumstances be drying on the skin. Vegetable soap tends to be more natural and contains no synthetic or chemical ingredients. Vegetable soap bases can also be used by brands and retailers looking to market supply chain certification, such as Organic, Natural, Sustainable,  Fairtrade as the soap is made using raw and natural oils, not surfactants. These soaps are typically referred to as ‘true’ and ‘traditional’ soap bars. The soap bar composition and performance can be adjusted by manipulating fats and oils. Additives like shea butter, argan oil, cocoa butter may be incorporated to give moisturize and cleanse the skin whilst washing.

(a) Glycerin bars/transparent bars: Used rampantly in our country in winter. They contain humectant–glycerine to counter the drying effects of soap.

(b) Superfatted soaps: Contain a greater amount of lipids such as triglycerides, lanolin,  paraffin, stearic acid, or mineral oils which provide a protective film on the skin.

(c) Deodorant soaps/antibacterial soaps: Contain antibacterial agents such as triclosan, triclocarban, or carbanile to inhibit the growth of bacteria and thereby odor.

Soaps are graded in terms of total fatty matter (TFM). The Bureau of Indian Standards  (BIS) has categorized bath or toilet soaps as ‘normal’, baby, transparent, and antibacterial soaps. The last three are called specialty soaps targeted to specific users. Toilet soap is a  cosmetic by law and it must fulfill the requirements of the relevant Indian standard. TFM is a  measure for identifying the amount of fatty matter present in soaps. TFM of a sample of soap can be determined as follows. A known weight of the soap is dissolved in water and the solution is treated with dilute sulphuric acid. The soap decomposes to sodium sulfate and fatty acids. The fatty acids so formed can be estimated and TFM calculated. Based on TFM, toilet soaps can be classified into three grades.

Table.1: Classification of toilet soaps based on TFM

Grade I toilet soap should have a TFM value above 80 percent, except in ayurvedic soap.  Any soap which has a TFM value of less than 55 percent is not considered toilet soap at all.  TFM is what lends soap its soapy feel and it is the TFM and the insoluble matter in the soap that largely distinguishes one soap from the other. The three grades should have less than  0.05% of a free alkali like sodium hydroxide and less than 1% of carbonate alkali. The salt content should not go above 1.5%. Today 85 percent of bathing soaps available in the market are not toilet soaps.

Special processes have been developed by Indian scientists to upgrade cheaper and easily available raw materials to make good quality toilet soap. Techniques have been developed to obtain good quality fatty acids for soap making from fish oil, neem oil, and  Karanja oil. India is the second-largest producer of castor oil, the first being Brazil. A process was developed in India to convert castor oil into good-quality soap-making oil. Textured castor oil is found to be very good for making transparent soap.