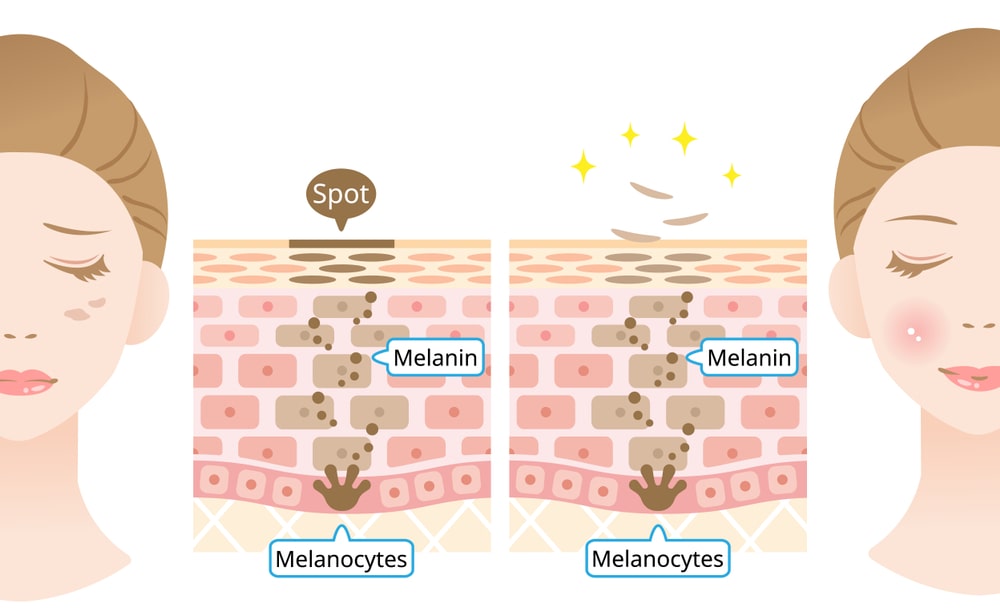 Structure of Skin: The skin or cutaneous membrane is the outermost layer that covers and protects the surface of the body from the external environment. It is the complex and largest organ of the body in terms of both surface area and weight which unites with the mucosal lining of the respiratory, digestive and urogenital tract to form a capsule that separates internal body structure from the external environment. This plays an imperative role by allocating abundant useful physiological functions. In adults, the skin covers an area of about 2 sq. meters  (22 sq. feet) and weighs about 4.5-5 kg (10-11 lb) and almost 16% of body weight. Its thickness ranges from 0.5 mm (0.02 inch) on the eyelids to 4.0 mm (0.16 inch) on the heels.  However, the overall thickness of the body is about 1-2 mm (0.04-0.08 inches). A typical sq. cm.  of skin covers 10 hair follicles, 12 nerves, 15 sebaceous glands, 100 sweat glands, 3 blood vessels within 92cm of nerves and 3 × 106 cells.

Normally the texture of skin is very smooth but becomes rough due to numerous environmental and age factors. The pH of the skin varies from 4 to 5.6 and refers to the pH of the film of aqueous and soluble material present on the surface of the skin. Sebum is helpful in the secretion of sweat and fatty acid influences the pH of the skin surface. Its acidic pH range also acts as preventing or limiting the growth of pathogens and other organisms.

The skin (cutis, integument) and its derivatives comprise the integumentary system. The  skin is broadly segregated into three basic layers such as:

It is the uppermost multi-layer of the skin, composed of stratified keratinised squamous epithelium. It contains four principal types of cells, such as keratinocytes (90%), melanocytes,  Langerhans cells and Merkel cells. The thickness of the epidermis varies depending on the cell size and the number of cell layers ranging from about 0.8 mm on the palms and soles down to 0.6 mm on the eyelids. The epidermis is divided into 5 sub-layers namely:

The nuclei are absent. Between the cells are lipids from lamellar granules that form a major constituent of the water barrier of the skin (Fig.2). These multiple layers act as protection for the deeper layer from injury and microbial abrasion. The thickness of the skin varies over the surface of the body ranges from 1 mm to 5 mm, which differs mainly in the palms and soles of feet.

(2) Stratum lucidum: It lies immediately below the stratum corneum and is considered as a  sub-division of the stratum corneum. It is a thin, more or less transparent, glistering layer. It is present only in the thick skin of fingertips, palms and soles. This is a highly refractile layer, poorly stained hyaline zone contains eosinophilic cells in the process of keratinization is well advanced.

(3) Stratum granulosum (granulos = little grain): It is the middle and superficial layer of the non-keratinized portion of the epidermis. These are 1-3 cells thick spindle-shaped cells enriched with intensely staining keratohyalin granules which contain cysteine-rich and histidine protein. This keratogenous or transitional zone is a region of intense biochemical activity and morphological changes.

(4) Stratum spinosum (spinos = thorn-like): This is the broad layer, where 8-10 layers of many-sided keratinocytes fit closely together. The cells flatten and their nuclei shrink and look like polygon, thus also called polygonal cells, prickle cells as they are interconnected by fine prickles which help in providing strength and flexibility to the ski. Projections of both Langerhans cells and melanocytes also appear in this layer.

(5) Stratum Germinativum or Stratum Basale (Basal = base): It is the deepest layer of the epidermis where basal cells are non-nucleated, columnar and about 6 µm wide with their long axis at right angles to the dermo-epidermal junction. It is also called stratum germinativum due to mitotic active cells which constantly proliferate the skin and renew the epidermis providing constant thickness and healthy balanced skin. This layer contains melanocytes which are responsible for the production and distribution of melanin granules to the keratinocytes required for pigmentation, a  protective measure against radiations.

The dermis is the second deeper region lying in between the epidermis and subcutaneous fatty region. It is formed from connective tissues containing collagen and elastin fibre including a few cells as fibroblasts, macrophages and adipocytes. Blood vessels, nerve glands and hair follicles are embedded in dermal tissues. The superficial portion of the dermis is called the papillary layer which consists of areolar connective tissues containing fine elastin fibres. The surface area is greatly increased by small finger-like projection called dermal papillae which contains papillary loops that project into the epidermis. These dermal papillae contain tactile receptors called corpuscles of touch or Meissner corpuscles, nerve endings that are sensitive to touch.

The reticular region, attached to the subcutaneous layer consists of dense irregular connective tissues containing fibroblast, bundles of collagen and some coarse elastic fibres. These collagen and elastin fibres provide strength, extensibility and elasticity to the skin. The extensibility can be seen during pregnancy and obesity which sometimes leave straie (Stretch marks) on the skin surface.

It is a subcutaneous layer that lies deep into the dermis, but not the part of the skin. This layer consists of areolar and adipose tissues known as superficial fascia attaching the dermis to the underlying structures. This region also contains nerve endings called lamellate (Pacinian) corpuscles that are sensitive to pressure. It serves as the storage depot for fat and contains large blood vessels that supply the skin.

(i) Hair follicle: It is the product of synthesized protein following cell division at the root of hair pressure. The number of hair per unit area varies at different parts of the body.

(ii) Sebaceous glands: These are responsible for sebum secretion and constitute a fatty layer over the skin and hair. These are present on the face, shoulders, upper chest and scalp but not palms and soles. The abundance of sebaceous glands is 500-1000 per square centimetre.

(iii) Eccrine sweat glands: These are salty sweat glands distributed over the surface of the body to regulate the body temperature by secreting a dilute aqueous solution of salt and some other minor components called salt. These glands are simple coiled tubes with a density from 100-200 glands per centimetre square of the body surface depending on the region.

(iv) Apocrine glands: These are present only in the selected region of the body such as axillae (armpits) in the anogenital region and around the nipples. Due to emotional stress and sexual stimulation, they secrete milky substances containing protein,  lipoprotein, lipids and diverse proteins. These are ten folds larger than the eccrine sweat gland.

(v) Nails: Nails are plates of tightly packed, hard, dead, keratinized epidermal cells that form a clear, solid covering over the dorsal surface of the distal portion of digits.

The skin performs a multitude of functions listed below: