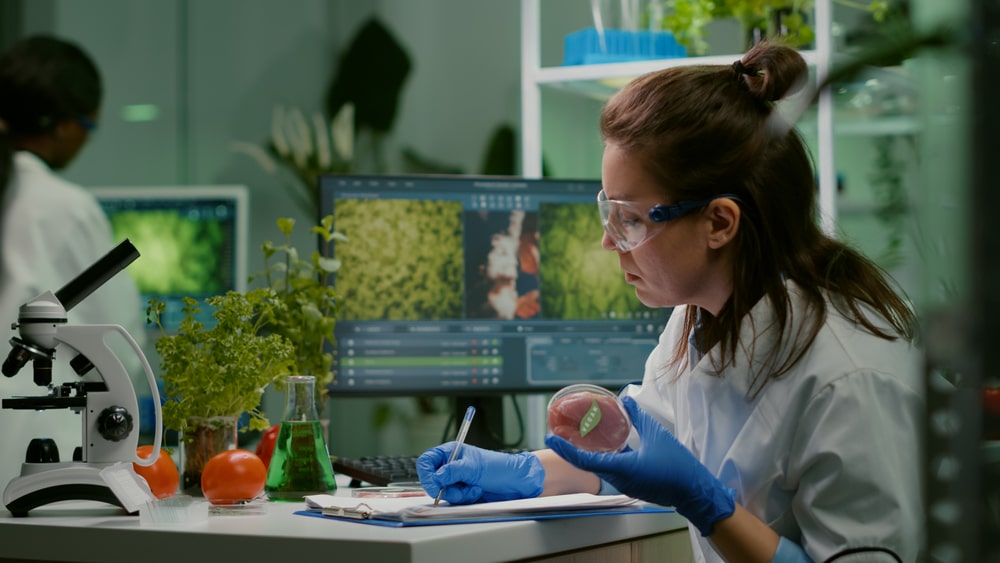 Types of Cultures: Plant Growth and development occur in two different ways namely determinate growth where plant growth occurs with certain shapes and sizes like leaves, fruits, flowers, etc., and indeterminate growth where plant growth occurs in the roots and stem part which is proliferating continuously. Types of cultures depend on the type of explant used. Hence, plant tissue culture is broadly classified into eight types viz.

Seeds are cultured in-vitro to generate seedlings or plants in aseptic conditions for raising the sterile seedling. The seed culture is done to get the different kinds of explants from aseptically grown plants that help in better maintenance of aseptic tissue (Fig.1).

Embryo culture is the sterile isolation and growth of an immature or mature embryo in-vitro for procurement of a viable plant. Embryo developed (initially white) from wide hybridization between two different species may not mature fully due to embryo endosperm incompatibility. The whole process is known as Embryogenesis (Fig.2).

It is the culture technique by which the apical meristem of shoots of angiosperms and gymnosperms are cultured to get the disease-free plants. Generally meristem tips, between 0.2-0.5 mm, most frequently produce virus-free plants and this method is referred to as meristem-tip culture (Fig.3). These explants are cultured on a medium containing cytokinin (plant hormone).

Buds contain active meristems in the leaf axils, which are capable of growing into a shoot. Each node of the stem is cut and allowed to grow on a nutrient media to develop the shoot tip from the axil which ultimately develops into a new plantlet. In the axillary bud method, where the axillary buds are isolated from the leaf axils and develop into shoot tips under little high cytokinin concentration (Fig.4).

It is a culture of an undifferentiated mass of parenchyma cell produced from an explant of a seedling or other plant part in agar medium under aseptic condition is known as callus culture. A callus is densely aggregated, uncontrolled, undifferentiated, unorganized, aerated homogenous parenchymatous mass (Fig.5).

Suspension culture is defined as a uniform suspension of separate cells in a liquid medium where agar is not used. In this medium, callus fragments are transferred to a liquid medium and agitated continuously to keep the cell alive and separate. Agitation is also achieved by a rotary shaker attached within the BOD incubator at a rate of 50 to 160 rpm. This culture technique is used to study the morphological and biochemical changes during their growth and developmental phases.

It is the in-vitro culture technique of anther containing microspores from unopened flower bud or immature pollen grains (Pollen culture) on a suitable nutrient medium under aseptic conditions for the development of haploid plantlets. By this culture technique haploid cells are obtained which is known as Androgenesis (Fig.6).

In this culture method, isolated protoplasts are cultured either in a liquid medium or semisolid agar medium in a thin layer or as small drops of nutrient medium in a sterile Petri dish. Protoplast cells are having a cell membrane without a cell wall (Fig.7). They are isolated either by the enzymatic method or by the mechanical method. Mechanical method is manual method and there is a possibility of a loss of protoplast cell due to friction force in motor and pestle. This method is avoided by following the technique likely a small piece of epidermis is selected from the explants then the cells are subjected to plasmolysis. This causes protoplasts shrinking and finally, the tissue is dissected to release the protoplasts from the cell wall. In the enzymatic method, enzymes such as cellulase, hemicellulase, and pectinase are used. At first, pectinase is used to breaks up the cell aggregates into individual cells by degrading middle lamella then these free cells are exposed to cellulase to release protoplasts from the cell wall. This enzymatic method is used widely to get more yields of protoplast cells as well as minimal or less damage to the protoplast cells.

This technique is also known as transformed root culture. It is a culture produced after the infection of explants or cultures by a naturally occurring soil bacterium Agrobacterium rhizogenes that contains root-inducing plasmids (Ri plasmids) are infect plant roots and cause them to produce opines (food source for the bacterium) and abnormally very fast growth. It grows by increasing the rate of cell division and cell elongation. Hairy roots are induced in most of the dicot plants by genetic transformation (through T-DNA, transfer DNA) with A. rhizogenes. Hairy root culture shows a very high growth rate in the absence of the growth regulator and does not require conditioning of the medium (Fig.8).

It is the technique that confines the cells to a definite region in space, known as a matrix. During that condition, the catalytic activity of the cells retains and prevents their entry into the mobile phase. Immobilization is achieved by binding these cells onto or within solid support. Some of the important materials are used as matrix-like gelatin, polylysine, agarose, alginate, etc. The cells are immobilized by covalently, adsorbed, cross-linked, encapsulated, and entrapment methods (Fig.9).