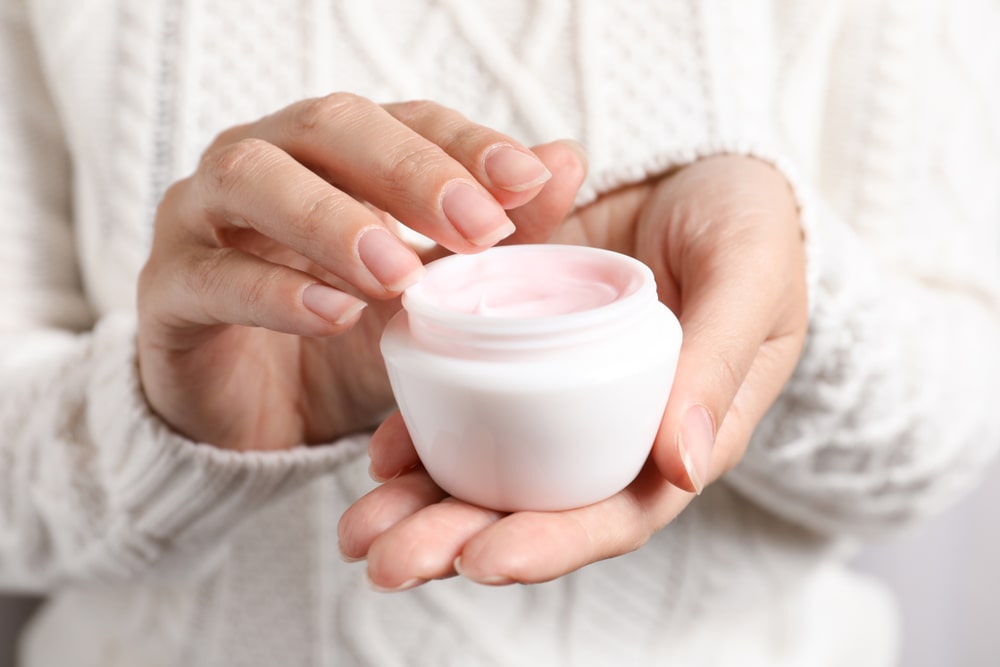 Cold cream is an emulsion of water and certain fats, usually including beeswax and various scent agents, designed to smooth skin and remove makeup. The emulsion is of a  “water in oil” type unlike the “oil in water” type emulsion of vanishing cream, which is so-called because it seems to disappear when applied to the skin. The original cleansing cream was based on one of the oldest-known emulsions and is commonly known as a cold cream. It was traditionally based on a mixture of natural waxes and vegetable oils (beeswax and olive oil) stabilized with borax. At the turn of the century, mineral oil replaced the more unstable vegetable oil. In a cold cream, the proportion of fatty and oily material predominates, but application to the skin results in a cooling effect which is produced from slow evaporation of the water contained in the emulsion. The name “cold cream” derives from the cooling feeling that the cream leaves on the skin. Cleansing creams are classified into two categories. One is the usual white, emulsified, or cold cream type often referred to as the beeswax-borax type of cream. The other is the translucent, liquefying type, usually anhydrous, and consisting of a mixture of hydrocarbon oils and waxes.

Beeswax-borax cold creams are usually made as water-in-oil (W/O) emulsions. After the creams are applied to the skin, much of the water evaporates leaving the remaining oil to act as a solvent that cleanses the skin of cosmetics and other grime. Beeswax is an important factor in determining the quality of the cream. For cosmetic formulations, it is defined as the purified honeycomb of the bee, free from all other waxes. Beeswax with the lowest melting point generally forms the softest emulsions. It is natural, moisturizing, soothing, and non-comedogenic. Borax is also an important ingredient of cold cream. When borax is dissolved in water, it produces boric acid and sodium hydroxide. The sodium hydroxide interacts with cerotic acid in the beeswax – a free fatty acid that makes up about 13% of beeswax by weight – and forms an anionic emulsifier, while the boric acid buffers the system.  The emulsifier created by the chemical reaction made the oil and water parts of the cold cream less likely to separate on standing, so cold creams made with borax were more stable.

Mineral oil is a hydrocarbon that is stable, inexpensive, not subject to rancidity, and is odorless. Mineral oil is a good solvent for the oil and grease binding either grime or makeup to the skin. The cleansing power of cream is related to its mineral oil content. It is noncarcinogenic and non-comedogenic. Mineral oil forms an occlusive barrier on the top of the skin that will prevent water from escaping from the skin, therefore improving skin moisture and combating skin aging.

The primary use of the cream is for skin treatment because of the mineral ingredients that are in the cream, it works as a moisturizer and works well for those that have very dry skin. With that in mind, it’s best to know the skin type is before using it for the best results. If one lives in an area where dry skin is always a problem, this is the best option for you. It can also be used as an alternative for lip balm if you have very dry, chapped lips. This is not to say that it won’t work for those that don’t have dry skin; the cold cream will still work on skin types other than the dry type but the results and the efficiency will vary greatly.  Another benefit of using this type of cream is as a makeup remover and cleanser. For those that wear makeup daily, it can be a little difficult to remove it at the end of the day. With a damp cloth, cold cream is seen as a more affordable method of getting rid of any face makeup and it moisturizes your face as well, so it gives you double benefits while you’re using it. Another use that it has when it comes to makeup is as a foundation. If it is applied to your face before putting on any makeup, you will end up with fewer blemishes as a result.

Men can also benefit from the benefits of the cream. It can be used as an alternative to shaving cream. A hot washcloth can help exfoliate the skin in the process and leave the skin feeling clean and smooth as with regular shaving cream. Not only does it leave the skin softer, but it also leaves it cleaner and brighter than regular facial cream.

After the First World War, as the number of cosmetic companies increased, new ingredients and formulations gave them opportunities to promote skin products with a wider range of abilities and functions. This led to products labeled as powder creams, tissue creams, foundation creams, hand creams, cleansing creams, youth creams, and so forth.  Selling creams simply as ‘cold’ or ‘vanishing’ became less and less attractive and products named by function, rather than by look or feel, became the norm. Consequently, the era of functionalized cold creams (cosmeceuticals) emerged. Table.2 below compiles the ingredients and beneficial effects of the cosmeceuticals.