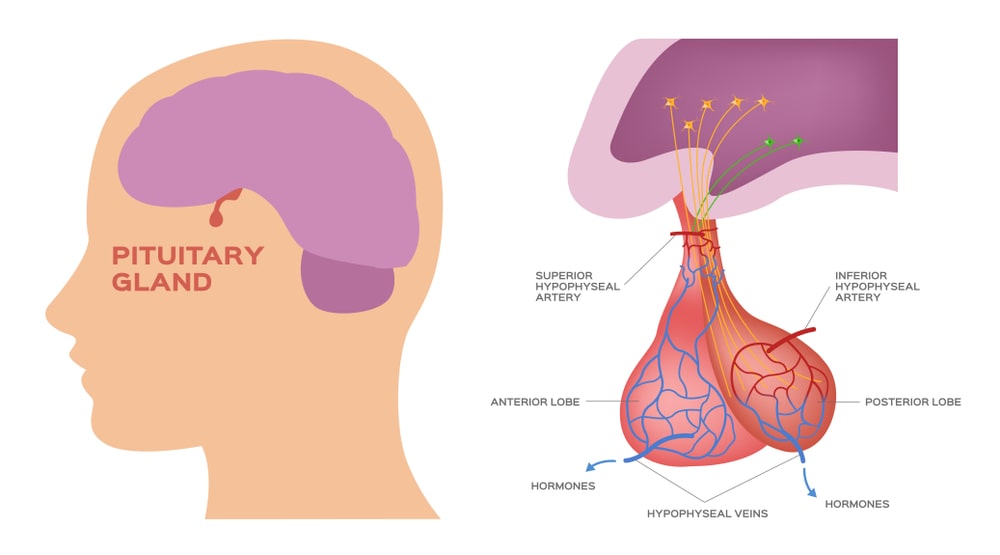 It develops from the ectoderm of the embryo. This pear-shaped gland measuring 1-15 cm in diameter lies in the hypophyseal fossa of sella turcica of the sphenoid bone. It attaches to the hypothalamus by a stalk, separate lobes (Figure) the infundibulum, and has two anatomically and functionally. The anterior pituitary (anterior lobe), also called the adenohypophysis forms 75% of the total weight of the gland. Pituitary Gland consists of two parts in an adult the pars distalis is the larger portion, and the pars tuberalis forms a sheath around the infundibulum. The posterior pituitary (posterior lobe), also called the neurohypophysis, consists of two parts-the pars nervosa (larger bulbar portion) and the infundibulum.

Adenohypophysis originates as Rathke’s pouch from the dorsal wall of stomodaeum in the embryo, but later its connection with stomodaeum disappears. The neurohypophysis originates as an outgrowth from the floor of the diencephalon. Thus, the pituitary gland is dual in origin. A third lobe called pars intermedia (intermediate lobe) atrophies during fetal development, but its cells migrate into adjacent parts of the anterior pituitary, where they persist.

The hypophyseal portal veins carry blood containing neurohormones (releasing factors) from the hypothalamus to the adenohypophysis. The axons of neurosecretory cells (more than 10,000 secretory neurons) extend into the neurohypophysis where these axons terminate as axon terminals. The axon terminals in the posterior pituitary are associated with specialized neuroglia called pituicytes. No hormones are synthesized in neurohypophysis but two hormones, synthesized in the hypothalamic neurosecretory cells, remain stored in very small vesicles in the axon end terminals. These vesicles are called Herring bodies.

Hormones of the Anterior Lobe

(a)Human growth hormone (HGH) or Somatotropin: Somatotrophs secrete HGH which in turn stimulates several tissues to secrete insulin-like growth factors (IGFs) or somatomedins, hormones that stimulate general body growth and regulate different aspects of metabolism. In response to HGH, cells in the liver, skeletal muscles, cartilage, bones, and other tissues secrete IGFs, which may act locally (autocrine) or in other tissues via the bloodstream (paracrine).

(b) Thyroid-Stimulating Hormone (TSH) or Thyrotropin: Thyrotophs of anterior pituitary secretes TSH. TSH controls the secretions and other activities of the thyroid gland. It influences the uptake of iodine, synthesis, and secretion of the two thyroid hormones triiodothyronine (T3) and thyroxine (T4). The hypothalamus has a stimulating effect on the production of a thyrotropic hormone (TRH), especially by increasing the secretion when the body is cold and decreasing secretion when the body is hot. High levels of T3 and T4 inhibit the secretion of TRH via negative feedback.

(c) Adrenocorticotropic Hormone (ACTH): Corticotrophs of the anterior pituitary secretes ACTH or Corticotropin, which stimulates the adrenal cortex to secrete glucocorticoids such as cortisol. ARH or corticotropin-releasing hormone (CRH) from the hypothalamus stimulates the secretion of ACTH by corticotrophs. Stress-related stimuli, such as low blood glucose or physical trauma, and interleukin-1 (produced by macrophages) also stimulate ACTH. Glucocorticoids inhibit CRH and ACTH release via negative feedback.

(d) Follicle-Stimulating Hormone (FSH): Gonadotrophs of the anterior pituitary secretes two hormones, FSH and LH. Both act on the gonads. In females, the ovaries are the targets: for FSH. Each month FSH initiates the development of several ovarian follicles (saclike arrangement of secretory cells that surround a developing oocyte). FSH also stimulates follicular cells to secrete estrogens (female sex hormones). In males, FSH stimulates sperm production in the testes. Gonadotropin-releasing hormone (GnRH) from the hypothalamus stimulates FSH release. The release of GnRH and FSH is suppressed by estrogens in females and by testosterone in males through negative feedback systems. There is no gonadotropin inhibiting hormone.

(f) Prolactin (PRL) or Mamotrophin hormone (MTH) or Luteotrophic Hormone (ETH) Lactotrophs secrete Prolactin (PRL), which initiates milk production in the mammary glands, together with other hormones. By itself, PRL has only a weak effect. Only after the mammary glands have been primed by estrogens, progesterone, glucocorticoids, hGH, thyroxine, and insulin, which exert permissive effects, does PRL bring about milk secretion. of milk from the mammary glands depends on the hormone oxytocin, released Ejection from the posterior pituitary. Together, milk secretion and ejection constitute lactation. Prolactin level rises during pregnancy, stimulated by prolactin-releasing hormone (PRH) from the hypothalamus. The sucking action of a nursing infant causes a reduction in the hypothalamic secretion of prolactin-inhibiting hormone (PIH), which is dopamine. Increased levels of estrogen and progesterone (as the menstrual cycle begins) increase the secretion of PIH and the prolactin level drops.

(g) Melanocyte-stimulating hormone (MSH): Some corticotrophs, remnants of the intermediate lobe, secrete melanocyte-stimulating hormone (MSH). MSH increases skin pigmentation in amphibians by stimulating the dispersion of melanin granules in melanocytes. Its exact role in humans is unknown, but the presence of MSH receptors in the brain suggests it may influence brain activity. There is little circulating MSH in humans. However, continued administration of MSH for several days does produce a darkening of the skin. Excessive levels of CRH can stimulate MSH release; dopamine inhibits MSH release.

Hormones of the Posterior Pituitary

The secretion of the posterior lobe is known as pituitrin and it contains two hormones : (i) Oxytocin or Pitocin, and (ii) antidiuretic hormone (ADH). They are synthesized in the hypothalamus and released into the capillary plexus of the infundibular process in the posterior pituitary. From this plexus, hormones pass into the posterior hypophyseal veins for distribution to target cells in the other tissues.

(a) Oxytocin (OT; Pitocin): Oxytocin promotes contraction of the uterine muscle and contraction of the myoepithelial cells of the lactating breast, squeezing milk into the large ducts behind the nipple. The amount of oxytocin secreted is increased just before and during labor and by sucking off the infant. Because of its role, oxytocin is called “birth hormone” and “milk ejecting hormone”.

(b) Antidiuretic Hormone (ADH) or Vasopressin or Pitressin: This hormone has two main functions:

(a) Pituitary Dwarfism: Deficiency of hGH from childhood causes this disorder. It is characterized by a small but well-proportioned body and sexual immaturity. These dwarfs have normal intelligence in contrast to those having a deficiency of thyroid hormone. Treatment requires administration of hGH during childhood before the epiphyseal plates close.

(b) Gigantism: Hypersecretion of hGH during. childhood causes gigantism, an abnormal increase in the length of long bones. The person grows to be very tall, but body proportions are about normal. increase in pituitary gland size affects (or suppresses) optic chiasma and ultimately affects vision.

(c) Acromegaly: Hypersecretion of hGH during adulthood is called acromegaly. The bones of the hands, feet, cheeks, and jaws thicken and other tissues enlarge. Also, the eyelids, lips, tongue, and nose enlarge, and the skin thickens and develops furrows, especially on the forehead and soles.

(d) Diabetes insipidus (DI): Neurogenic diabetes insipidus results from hyposecretion of ADH, usually caused by a brain tumor, head trauma, or brain surgery that damages the posterior pituitary or the hypothalamus. In nephrogenic diabetes insipidus, the kidneys do not respond to ADH. The ADH receptors may be nonfunctional, or the kidneys may be damaged. A common symptom of both forms of DI is the excretion of large volumes of urine, with dehydration and thirst. Bedwetting is common in afflicted children. A person with DI may die of dehydration if deprived of water for only a day or so.

(e) Simmond’s Disease: it is commonly due to a tumor in the anterior lobe of the pituitary gland. Such patients are sometimes said to have pituitary or hypophyseal cachexia. The marked weight loss is a possible but not invariable finding.