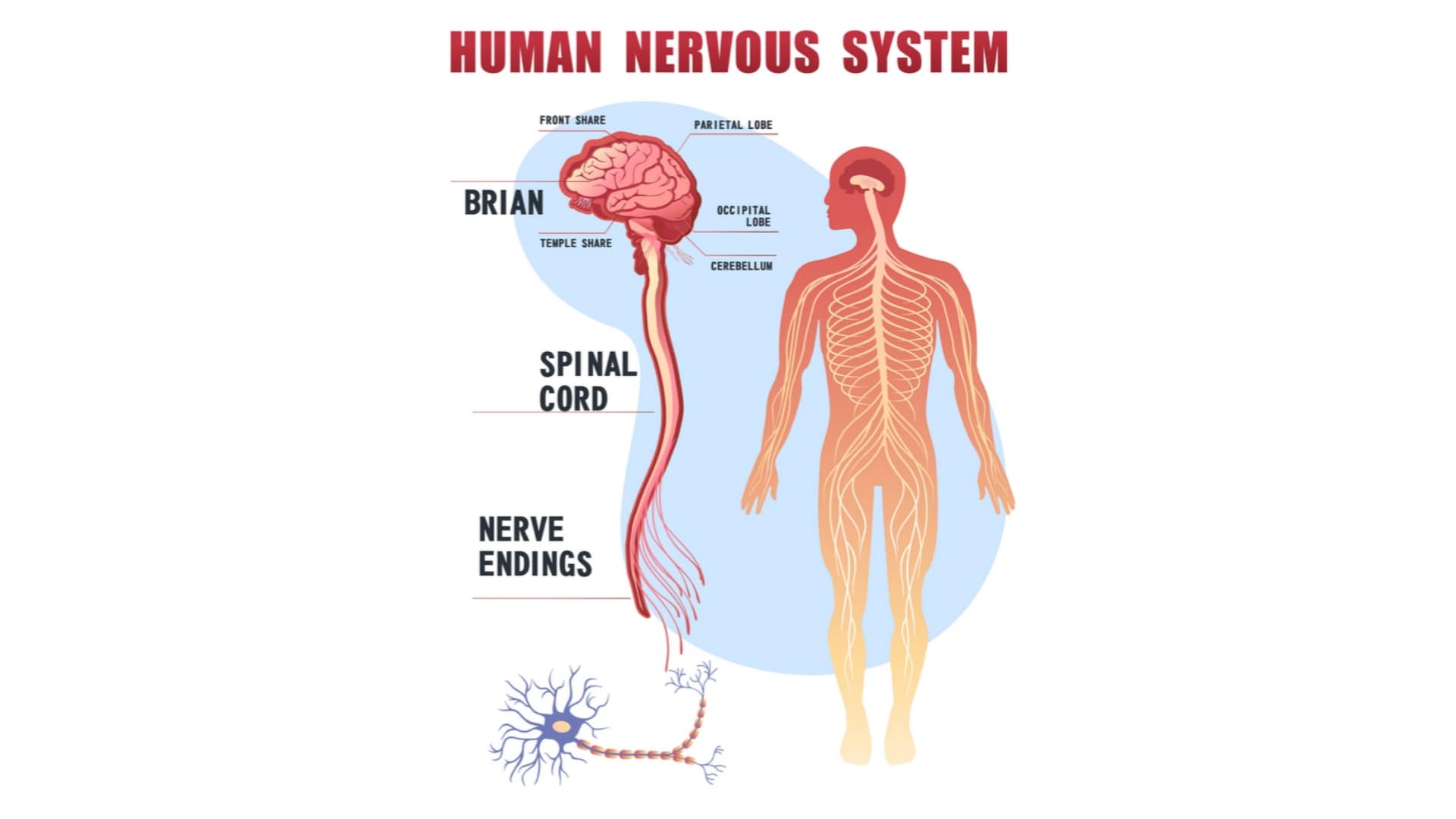 The nervous system consists of the brain, spinal cord, sensory organs, and all of the nerves that connect these organs with the rest of the body. Together, these organs are responsible for the control of the body and communication among its parts. The brain and spinal cord form the control center known as the central nervous system (CNS), where information is evaluated and decisions made. The sensory nerves (afferent) and sense organs of the peripheral nervous system (PNS) monitor conditions inside and outside of the body and send this information to the CNS. Motor nerves (efferent) in the PNS carry signals from the control center to the muscles, glands, and organs to regulate their functions. The nervous system uses both electrical and chemical means to send and receive messages.

The basic building block of the nervous system is a nerve cell or neuron. Neurons are shaped differently depending on where they are in the body and what role they play. All neurons have finger-like projections called dendrites and a long fiber called an axon.

In many cases, the axon is coated by a specialized membrane called the myelin sheath. The axon feathers out and has several bumps on it. Each bump sits near to a dendrite from another neuron. The space between the bump and the dendrite is called a synapse. Messages jump the synapse from one neuron to the next, using special chemicals called neurotransmitters. Unlike other cells in the body, neurons are not easily replaced if they die or are damaged by infection or injury.

The brain and spinal cord make up the (CNS). They are wrapped in a thin lining called meninges and bathed with cerebrospinal fluid (CSF).

The brain is a powerhouse of the body, even though it only makes up two percent of the body’s weight. This soft, jelly-like organ has countless billions of neural cross-connections. The brain organizes and supervises the workings of the body, while its higher functions give us consciousness and personality.

The spinal cord connects to the brain and runs the length of the body. It is protected by the bones of the spine (vertebrae). Nerves branch off from the spinal cord into the arms, legs, and torso.

The portion of the nervous system lying outside the brain and spinal cord. It is made up of two main parts: the autonomic and the somatic nervous systems.

The (ANS) is part of the peripheral nervous system. One of its main roles is to regulate glands and organs without any effort from conscious minds.

The sympathetic nervous system prepares the body for situations requiring alertness or strength, or situations that arouse fear, anger, excitement, or embarrassment (“fight or flight” situations). In these kinds of situations, the sympathetic nervous system stimulates cardiac muscles to increase the heart rate, causes dilation of the bronchioles of the lungs (increasing oxygen intake), and causes dilation of blood vessels that supply the heart and skeletal muscles (increasing blood supply). The adrenal medulla is stimulated to release epinephrine (adrenalin) and norepinephrine (noradrenalin), which in turn increases the metabolic rate of cells and stimulates the liver to release glucose into the blood. Sweat glands are stimulated to produce sweat. In addition, the sympathetic nervous system reduces the activity of various “tranquil” body functions, such as digestion and kidney functioning.

The somatic nervous system is also a part of the peripheral nervous system. One of its roles is to relay information from the eyes, ears, skin, and muscle to the (CNS). It also obeys commands from the CNS and makes muscles contract or relaxes, allowing us to move.

A synapse is a tiny gap across which a nerve impulse passes from one nerve cell to another nerve cell, a muscle cell, or a gland cell.

Neurotransmitters are the brain chemicals that communicate information throughout the brain and body. They relay signals between nerve cells. The brain uses neurotransmitters to regulate activities such as the heart to beat, lungs to breathe, and stomach to digest. They can also affect mood, sleep, concentration, weight, and can cause altered functions when they are out of balance. Neurotransmitter levels can be depleted in many ways.

There are two kinds of neurotransmitters Inhibitory and Excitatory.